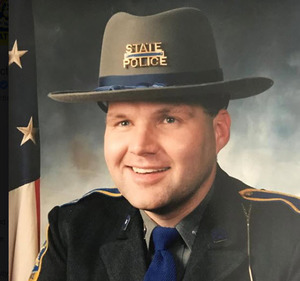 Connecticut State Police regrets to announce the passing of Trooper First Class Eugene Kenneth Baron, Jr., (retired). TFC Baron died Monday, May 25, 2020, from cancer resulting from his response to the World Trade Center site following the terrorist attacks on September 11,
2001. This is classified as a line of duty death.

Trooper Baron, along with other members of the Traffic Services Unit of the Connecticut State Police responded to the World Trade Center immediately following the attacks to search for possible survivors and serve as a liaison to Connecticut families.

Trooper Baron served with the Connecticut State Police for a total of 18 years, leaving with a partial disability retirement in 2007. He is survived by his three children, his partner and her two children, two sisters, and his parents.

“Our condolences and prayers go to the Baron family at this time. Trooper Baron contracted cancer while doing a job that he loved. His first concern on September 11, 2001, was to help people affected by the terrorist attacks,” Commissioner Rovella noted. “He was always a Trooper at heart and he will be greatly missed.”

“It is with deep sadness that we announce the death of TFC Baron. He served this agency proudly and was a vital member of the State Police team,” said Colonel Mellekas. “Our Troopers put their lives on the line each day and now 24 have made the ultimate sacrifice for the citizens of Connecticut.”