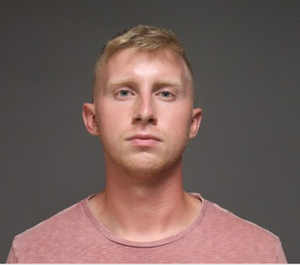 Suspect Arrested in Hit and Run Crash that Killed Pedestrian

Chief Christopher Lyddy reports that the Fairfield Police Department has arrested and charged a man in connection with a fatal hit-and-run crash involving a pedestrian over the weekend.

On Saturday, July 4 between 7:30-7:45 p.m., a pedestrian was struck and killed in the area of 2000 Redding Road. The operator of the vehicle fled the scene prior to the arrival of police.

The victim was visiting family in Fairfield and was walking her dog at the time of the crash. Two passing motorists found the victim lying in the roadway and called 911. She was later identified as Marileidy Morel Araujo, age 32, of Matamoras, Pennsylvania.

During the initial investigation, police were looking into the possibility of a dark-colored Jeep Wrangler being involved in the crash. Upon further investigation and based on additional evidence, it was determined that the suspect vehicle was not a Jeep Wrangler, but likely a larger vehicle.

A clear marker lens and other debris from the suspect vehicle was located by police at the scene.

On Monday, July 6, members of the Fairfield Police Quality of Life Unit, Crash Investigation Unit and Easton Police canvassed the Redding Road area and made contact with residents on Redding Road who were able to provide video of the roadway during the timeframe that the crash occurred. The video revealed a White Dodge Ram pickup truck with black rims fleeing the area north on Redding Road with a large American flag flying from a pole attached to the rear tow hitch.

Evidence located at the scene was then identified by a local dealership as likely being from a Dodge Ram 2500 or 3500 between the model years of 2010 and 2016. Further investigation revealed that the truck likely had passenger side mirror damage and would likely be missing the lower plastic portion of the mirror and the corner light.

Additional video was obtained of the same vehicle at other locations throughout the day on July 4. Images of the vehicle were analyzed by detectives and a complete description and images of the suspect vehicle were distributed to law enforcement personnel. Crash Investigation, Traffic Unit and Detective Bureau personnel continued their investigation and developed several leads and possible suspect information.

On Tuesday, July 7, Patrol Division personnel located a Dodge Ram fitting the description traveling on North Benson Road and conducted an investigative stop of the vehicle.

KOT is scheduled to appear at Bridgeport Superior Court on Wednesday, July 15. He was released after posting $150,000 bond with a condition that he not operate any motor vehicle pending arraignment before the Superior Court and permission being granted by the court.

"The collaborative and resolute efforts of all involved personnel are a shining example of the persistence, dedication and professionalism continually exhibited by the men and women of the Fairfield Police Department," Chief Lyddy said. "We would like to again thank the several hundred individuals who provided potential leads and tips throughout the investigation."

This incident remains under investigation by the Fairfield Police Crash Reconstruction Unit. Anyone with additional information or surveillance video is asked to contact Crash Reconstruction Supervisor Sgt. Michael Paris at This email address is being protected from spambots. You need JavaScript enabled to view it. or 203-254-4862.

These are allegations. All suspects are innocent until proven guilty.