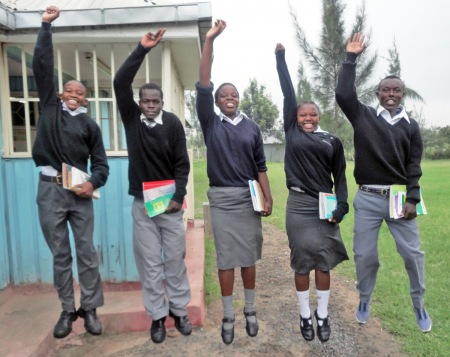 On Friday, April 27th the Ridgefield Boys and Girls Club will host JamQuest Hoops, the Fifth Annual 3-On-3 Basketball Tournament to raise awareness and crucial funds for kids in poverty and depravation in Kenya, Africa. Nick Shoff an RHS Senior Varsity basketball player began JamQuest Hoops as a service project in the eighth grade with the support of ERMS Social Studies teacher Maureen Tyra and has seen it develop into a highly anticipated, globally impacting humanitarian effort. Recently NBA Global Ambassador Dikembe Mutombo and NFL Chargers All Pro quarterback Philip Rivers each personally contacted Nick to offer their recognition and support.

The JamQuest Executive Team is comprised of all RHS senior student athletes including Ryan Callanan (Varisity Baseball Captain), Allie Schiffer (Student Council President and Varsity Girl’s Hockey Captain), John Turner (Varsity Football Captain), Nicole Rioseco (Varsity Girl’s Soccer Captain), Sarah Kadagian (Varsity Tennis), Nick Shoff (Varsity Basketball) and Grayson Wiley (Varsity Golf). In March they addressed several hundred students at both ERMS and SRMS about the needs of kids around the world and the importance of service in assemblies entitled, “Everyone Can Be Great Because Everyone Can Serve”.

After the recent assembly at Scotts Ridge Middle School Allie Schiffer RHS Student Council President commented, “JamQuest Hoops means commitment to something we all think really matters.” Tim Salem, SRMS Principal stated, “I applaud the efforts of JamQuest Hoops, the impact they are making on kids in Kenya is astounding.” Dikembe Mutombo said in a personal video to Nick, “The food, clothes and money that you’ve been raising is very important, but to me the hope that you’re giving to them, to know that somebody’s there and cares for them is most important.” Philip Rivers wrote Nick a letter of recognition for his “service to the community and the world”.

The upcoming tournament is an eagerly anticipated event in Ridgefield. Over the last four years over $18,000 has been raised through donations and entry fees and more than 500 participants have played in the tournament.  For the third consecutive year Dr. Mark Ottenweller, International Crisis Medical Worker and Global AIDs Coordinator for HOPE worldwide will be speaking on the day of the event.  If you would like to contribute to this effort please see JamQuestHoops.com for ways to donate. Any amount is welcome. JamQuest Hoops is striving to raise $25,000 this year.

JamQuest Hoop’s mission statement is: To bring faith, hope and love to kids in need around the world through the care and service of young athletes.