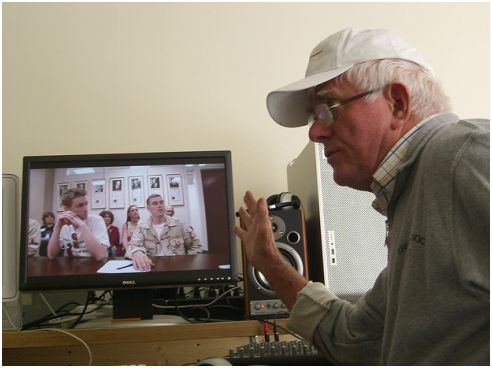 On Friday, November 9, at 7:30 p.m., The Ridgefield Playhouse Film Society "Documentary Film Series" will present Body of War, an intimate and transformational feature documentary about the true face of war today. Tomas Young is a 25-year-old vet, paralyzed from a bullet to his spine, wounded after serving in Iraq for less than a week. This feature documentary, Body of War, was produced and directed by Phil Donahue and Ellen Spiro, and tells of Tomas Young’s coming home story, his evolving into a new person coming to terms with his disability and finding his own unique and passionate voice against the war. Television legend and co-director of Body of War Phil Donahue will be on hand to participate in the Q&A hosted by the Emmy Award-winning television journalists Ira Joe Fisher and Morton Dean following the film screening. This event is underwritten by Cohen and Wolf, P.C., The Ridgefield Press and Sony XDCAM HD.

The documentary unfolds on two parallel tracks. On the one hand, Tomas Young evolves into a powerful voice against the war as he struggles to deal with the complexities of a paralyzed body. On the other, the historic debate about going to war in Iraq unfolds in Congress. The award-winning documentary film opens as Tomas and his fiancée Brie prepare for their wedding. However, because of his disability, the simple everyday activities for Tomas are involved and challenging. War is personal and Body of War’s many remarkable scenes depict how vulnerable and open Tomas is as he interacts with his wife, family, and friends.

In 2007, filmmakers Phil Donahue and Ellen Spiro's Body of War received the National Board of Review "Best Documentary of 2007" award.  In addition, it won the "People's Choice Award" at the Toronto International Film Festival Festival and "Best Documentary" awards at the Palm Springs, South by Southwest, AFI, Santa Barbara, Miami and Philadelphia Film Festivals. Body of War features two original songs by Eddie Vedder and is a naked and honest portrayal of what it’s like inside the body, heart and soul of an extraordinary and heroic young man.

Seating is limited at the popular Film Series events. For reserved seats, ($10 adults/$7.50 seniors/$5 students), call or visit the box office at (203) 438-5795, or go to ridgefieldplayhouse.org. The Ridgefield Playhouse is a not-for-profit performing arts center located at 80 East Ridge, parallel to Main Street, Ridgefield, CT.