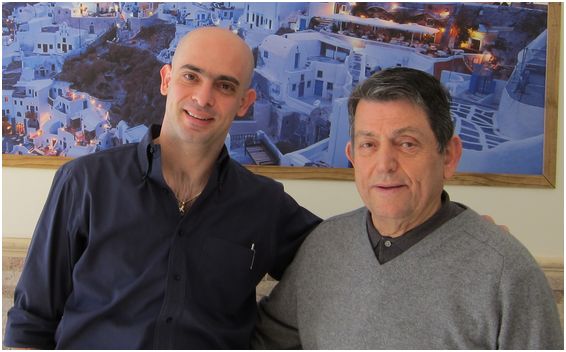 Dimitrios Paschalidis recalls a date vividly. “It was 1968, on April 11th at 11am.” Paschalidis traveled eleven days by boat to come to America from his native Greece. “I grew up hungry,” he says. For nearly two decades the very patriotic Paschalidis has been feeding the hungry. He is the owner of the very popular Dimitri’s Diner in Ridgefield, and together with Kostas Mavridis, he recently opened an authentic Greek eatery called Gyro on Pita.

Opening an eatery that sells primarily Greek cuisine is something Paschalidis has thought about for a while. “There is no place in Connecticut where you can eat a real gyro,” says Paschalidis. Not even Dimitri’s? “No, those gyros are not the kind you’ll find in Greece,” says Paschalidis, who once traveled over 40 miles to Astoria, Queens for a gyro.

Creating a genuine Greek gyro takes training from an expert. For that reason, Paschalidis and Mavridis brought a chef from Greece to Connecticut. “He came from Athens and was here for three months teaching us,” says Paschalidis.

Very different from the variety of diner style offerings that you will find on the menu at Dimitris, Gyro on Pita hones in on Greek specialties: four different types of gyros, chicken souvlaki, Avgolemono soup, and salads. You’ll also find Paninis and burgers (both Greek-style and American) on the menu. “Some people don’t know we make our own freshly ground burgers,” says Pashalidis. The chicken, pork, lamb and beef all roasted on site.

Upon seeing your gyro, you may think there is some sort of mistake- crispy French fries are protruding from the pita. After one bite, you’ll realize the importance of the fry - this Greek style of preparing a gyro is utter brilliance. Also, making the gyro authentically Greek is the way in which the meat is roasted: on a vertical split. Coupled with your choice of meat and, of course, the fries are thinly sliced onions, tomatoes and tzatziki sauce.

One more essential ingredient in all of Dimitrios Paschalidis recipes- Kostas Mavridis. “I want people to get to know him, “ says Paschalidis. After 18 years, Paschalidis is planning on retiring. “I think it will be in 2014.” Dimitrios has the utmost respect and confidence in this young Greek chef who has been part Paschalidis business for the past seven years. “I knew after working with Kostas for just two years that he was the one who I would someday hand my business to,” says Paschalidis.

Gyro on Pita is open seven days a week from 8am to 8pm on weekdays and 8am to 6pm on weekends. There is no waitress service. Just head to the large counter where you’ll feast your eyes on large boards displaying breakfast, lunch and dinner options.