Why should we "Shake It Off"? HamletHub asks Zoe 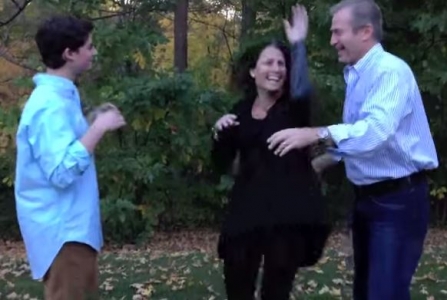 RHS freshman Zoe Butchen has captivated her hometown in Ridgefield and beyond by challenging people to videotape themselves dancing to Taylor Swift's Shake It Off song. Zoe's mission? To raise awareness for a disease that impacts the lives of approximately 60,000 Americans each year - Parkinson's.

Zoe's dad Jeff was diagnosed with the disease a year and a half ago and rather than wallow in sadness during this heartbreaking time in her life, this amazing young girl chose to shine a light upon Parkinson's Disease and create dance, shake, and donate for a cure.

I had the blessing and honor of interviewing Zoe about her heartwarming challenge and how it is impacting the lives of so many.

1. For those who don't know, tell me how you started up the Shake It Off craze

When I first found out that my dad had Parkinson's I wanted to see if I could do something to make it better for him and other people living with the disease. Our family joke has been for dad to “shake it off,” so when the song by Taylor Swift came out and I watched the video of all the people dancing and shaking, I thought that it would be a perfect thing to use to raise money and awareness. After sharing with my family and hearing such great feedback, we decided to figure out a way to make this into a bigger idea. Our goal is to get Dance/Shake/Donate to go viral to the same levels as the ALS Ice Bucket Challenge.

2. How does it feel to know that what you've started is starting to have a positive impact on so many people?

I've had so many people reach out to me saying that this is such an amazing thing that I'm doing with my family and that they would love to help and it makes me feel so good to know that I’m helping so many people. I really hope everyone continues to spread the challenge and achieve our goals of raising awareness and money for research. My dad even received a call this week from the Parkinson’s organization in Canada who will be supporting the campaign.

3. Tell me about how Ridgefield has supported you and your family's fight against Parkinson's?

Friends and other people in the community are supporting us by re-posting the link and sharing it on Facebook, twitter and other media. We’ve had ideas about getting the High School involved as well as having the RHS dance team and other athletic teams to create videos and challenge other schools. I know that some of the organizations that I’m involved with have also offered to help by creating videos and supporting it through social media channels.

4. What is the most important lesson you've learned from watching your father courageously battle this disease?

Having a positive attitude is the most important thing but you also need to be strong knowing love is a cure.

For more info on Zoe and her fight to help cure Parkinson's, please click here.