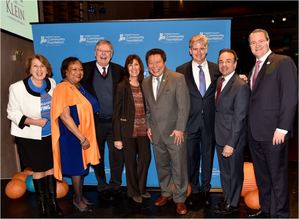 “This is the sixth year we have witnessed the true spirit of philanthropy in Fairfield County and it was thrilling,” states Juanita James, President and CEO, Fairfield County’s Community Foundation. “Together, members of our community, nonprofit organizations, businesses and media achieved a momentous impact right here at home. We have just witnessed the determination of thousands of our neighbors to create a thriving region for the people and places that are served so admirably by our nonprofit sector. This Giving Day, our region exemplified the motto of Fairfield County’s Community Foundation – Together We Thrive. THANK YOU!”

For the Community Foundation, the community-building aspect of Giving Day is as critical as the dollars raised. As Fairfield County’s biggest philanthropic event, Giving Day encouraged the community to come together and make a difference in the lives of their neighbors. Nonprofits from a wide variety of interests were represented including the arts; education; animal welfare; human services; housing and much more. 415 nonprofits benefited on Giving Day 2019 and raised critical funding, while increasing awareness about the amazing work they do throughout the region.

This year, Giving Day’s champion sponsor for the sixth year, Bank of America, helped to empower the community to participate in philanthropy by encouraging local giving to nonprofits, serving the 23 towns and cities of Fairfield County. “Every year, I am more amazed by the generosity of our community,” said Bill Tommins, Southern Connecticut Market President, Bank of America. “Fairfield County’s Giving Day is like no other event in the region and we are honored to have supported the event since its inception.”

The top organizations raising the most money on Giving Day 2019 are as follows: Curtain Call raised $135,515 from 1,045 gifts and prizes; followed by Wildlife In Crisis at $82,110 from 150 gifts and prizes; and Chelsea Piers Scholarship Fund raised $67,245 rom 189 gifts and prizes. LifeBridge Community Services had the unique distinction of having the most donors, totaling 1,117, and as a result raised $60,623 from gifts and prizes. Details of the top nonprofit fundraisers, donors and much more can be found at FCGives.org.

Fairfield County’s Community Foundation originally initiated Giving Day in 2014to empower the community at large and encourage local philanthropy across the many avenues of need in the region.

James concluded, “It is incredibly rewarding to think that over the past six years, Fairfield County’s Giving Day has raised over $7.6 million dollars for more than 800 local nonprofits, supporting their work to change lives for the better! We are overjoyed and humbled by the community’s outpouring of support, and eager to start planning for Giving Day 2020!”