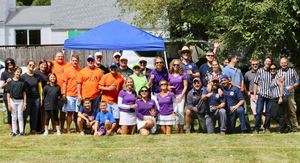 The battle for the esteemed title of Branchville Champion Bocce Team will once again be waged this Saturday, September 7 on the site of the new Branchville bocce courts located at 59 Willridge Road Ridgefield (off Route 7).  Six teams representing various local charities will play in the Fifth Annual Branchville Charity Lawn Bocce Tournament in the name of fun and fundraising.

Bocce enthusiast extraordinaire and organizer Mitch Ancona says, "The motto of this tourney is simply to have fun...and give some money away to some awesome organizations that help make our communities even more wonderful."

Each team will consist of four players who will be competing for over $3,000 in prize money.  Teams scheduled to play include: Georgetown Volunteer Fire Department, the Women's Center, Wilton Library, Ridgefield Library, Boys & Girls Club of Ridgefield, and the RVNA.

In addition to the trophy and bragging rights, prizes include donations made to the charities for the top four teams:  First place: $1500; 2nd place: $750; 3rd place: $500; 4th place: $250. There will also be a $500 bonus Spirit Award, the recipient of which must knock their tailgate party out of the park! And, new this year, teams will compete in a Bonus Round for a chance to win $500.00.

In 2018, Team RVNA took home the coveted Spirit Award while team Ridgefield Library added a 1st place WIN to the history books! Who will be the 2019 Bocce Champion and bring their "A" tailgate game?

Games will begin at 10 am and run all day.  The public is invited to attend the free event to cheer on their favorite teams and players.

“The bocce tournament is a culmination of the traditional Ancona business objective,” says Ancona. “Focus on family, community, and charity – with a good dose of fun," he adds.