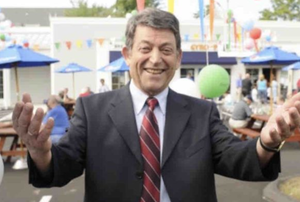 Dimitri Paschalidis, co-owner of Dimitri's Diner and Gyro on Pita passed away on April 1 after head surgery performed due to aggressive cancer. For many years Dimitri had a vision of helping Ridgefield High School seniors by establishing two separate scholarship funds of $50,000 each.

At the time of his death, Dimitri was just $7,000 short of meeting his goal.

Ridgefield residents Joyce Ligi and Christina Nolan have joined forces to organize a fundraising campaign and ask for community support so Dimitri can realize his goal.

Members of the Ridgefield Scholarship Group met with Dimitri's partner, Kostas to see if a way could be found to cross that shortfall.  It was decided to set up a GoFundMe for the general public to be part of this.  Kostas committed to matching up to $3000 from Dimitri’s Diner.

Donations beyond the goal will be split evenly between the 2 scholarship funds.  Donations of any size are welcome.

You can donate HERE.

According to Ligi and Nola, Dimitri planned that the core would be invested and earnings would be used for scholarships to be awarded for many years to come. Dimitri Scholarships are under the umbrella of Ridgefield Scholarship Group, Inc.  For more than 20 years, Dimitri has provided 2 Ridgefield High School seniors with the Dimitri Athletic Scholarship (one male, one female) to help offset college expenses.  He was well on his way to funding the Dimitri Academic Scholarships for 2 graduating seniors. Time ran out for him to fully fund this.

This GoFundMe will be open from now until June 15.  The intention is to be able to assure disbursement of these 2 Dimitri Academic Scholarships this June and in future years.

"It is a tribute to Dimitri for us collectively to help provide this on behalf of a man who offered so much," Ligi and Nolan say.