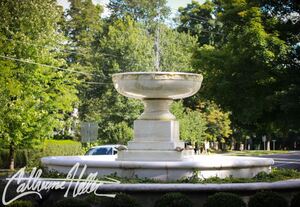 Once again, the Lewis Fund is seeking applicants. The Lewis Fund awards grants to non-profit organizations for activities that are conducted in whole or in part for the benefit or use of residents of Ridgefield and its vicinity.

Started under the term of the will of Wadsworth R. Lewis, the son of a prominent Ridgefield family, who died in 1942, the Lewis Fund has awarded grants totaling in excess of $4,050,000. The distribution of Lewis Fund grants began in 1950 after the death of Mary Russell Lewis, the mother of Wadsworth Lewis. Last year, the Lewis Fund awarded grants totaling over $118,000 to over 50 organizations. The Boys & Girls Club of Ridgefield, RVNAHealth, Ridgefield Library, Founders Hall and Meals on Wheels were some of the local organizations that received awards from the Lewis Fund.

“We look forward to receiving grant requests from many different organizations throughout town whose mission is to serve Ridgefield residents,” said Marcie Coffin, Chairman of the Advisory Committee of the Lewis Fund and Executive Vice President of Fairfield County Bank. Coffin is one of three Ridgefield residents who oversees the distribution of Lewis Fund grants.

“The Lewis Fund is truly one of this community’s fine resources and enriches the lives of so many of us who live in Ridgefield,” said Mrs. Coffin.

Requests must include a current IRS determination letter, a copy of the organization’s most recent financial statement, proposed budget for the current year, and a proposal requesting funds for a specific project or general support that describes the organization’s activities that specifically benefit Ridgefield’s Residents.

The committee will review requests and funds will be distributed later in February.