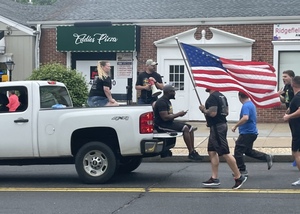 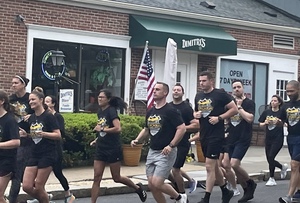 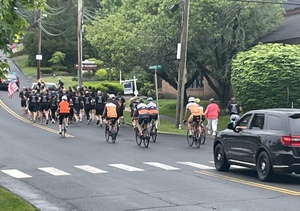 Despite the gloomy June weather, the men and women of Connecticut law enforcement braved the drizzle and haze to participate in the annual Torch Run, a fundraiser for the Special Olympics of Connecticut.

Escorted by two police cars, approximately 50 police and corrections officers, and Special Olympians journeyed from Dimitri's Diner to East Ridge Middle School, back to Main Street, ending with an exciting finish back at Dimitri's carrying the Flame of Hope, "symbolizing courage and celebration of diversity uniting communities around the globe."

During the run, Prospector Theater employees held up bright pink signs with messages of hope and encouragement for the Torch Run participants. Other supporters also cheered on the sidelines while law enforcement bicyclists, runners, and police car drivers occupied the road to complete their run.

The Torch Run is a statewide event for the Special Olympics that covers over 500 miles and goes through 100 towns.