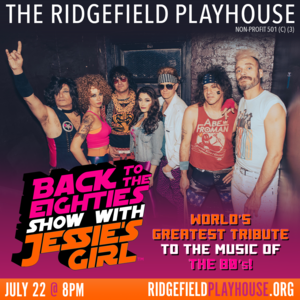 Dig out your Jordache jeans, legwarmers, and extra-large bottle of Aqua Net and get ready to dance the night away as we travel back to the 1980’s!

The Ridgefield Playhouse has announced Jessie’s Girl will rock the stage on Friday, July 22nd at 8pm, as part of the Pepsi Rock Series Driven by North American Motor Car.

There is no decade like the 80’s and no band that has mastered the music of the time period like Jessie’s Girl! Hear all of your favorites 80s hits by Prince, Madonna, Eddie Money, Duran Duran, Whitney Houston, Cyndi Lauper, Pat Benatar, Van Halen, J. Geils Band, Soft Cell, The Police and many more!

The show is led by three of NYC’s top rock and pop vocalists (Jenna O’Gara, Chris Hall, and Mark Rinzel) and backed by a phenomenal band (Eric Presti on guitar, Drew Mortali on bass, and Michael Maenza). Original 1980s artists have dubbed the band’s performances as “amazing” (Tiffany), “super tight” (MC Hammer), and “spot on” (Debbie Gibson). In fact, many 80s icons have performed on stage with Jessie’s Girl including, Tone Loc, MC Hammer, Tiffany, Debbie Gibson, Rob Base, Taylor Dane and, of course, Rick Springfield whose 1981 hit “Jessie’s Girl” was the inspiration for the band’s name and earned him an eventual Grammy Award for Best Male Rock Vocal Performance.

From their neon-colored flashy costumes to the remarkable renditions of the music we all loved, the Back to the Eighties Show by Jessie’s Girl is New York City area’s favorite 80’s throwback experience!

For more information or to purchase touchless print at home tickets ($50 – $65) go online at www.ridgefieldplayhouse.org or, you can call the box office (203) 438-5795. The Ridgefield Playhouse is a non-profit performing arts center located at 80 East Ridge, parallel to Main Street, Ridgefield, CT and is committed to keeping the arts alive and available to all.