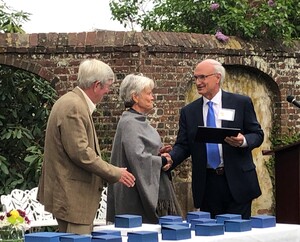 Kam and Don Daughters were awarded the Ridgefield Arts Council’s annual Behind-the-Scenes Honor for their years of exceptional volunteer service at Keeler Tavern Museum & History Center. The awards ceremony, where volunteers from numerous arts organizations in the Ridgefield community were acknowledged, was held on May 6 in KTM&HC’s historic walled garden.

Kam Daughters, a volunteer at KTM&HC since 1996, began her record of service as a docent, giving tours to museum visitors. She served as president of the museum's board of directors in 2001, and she has been on several committees, including KTM&HC’s Capital Campaign and multiple Gala committees. Don Daughters has been an enthusiastic historical reenactor since 2017. He is particularly well-known for his portrayal of the heroic General Wooster at KTM&HC school tours and in the “Dunk Tank” during July 4 museum festivities. He has also acted in KTM&HC’s Lantern Light Tours.

“We are thrilled to recognize Kam and Don for their tireless service and on-going contributions,” said Rhonda Hill, KTM&HC board president. “Our organization depends on the hard work and passion of many volunteers, and Kam and Don demonstrate that commitment in all they do.”

To learn more about volunteer opportunities at KTM&HC, check out our website here.