Details
Published on Thursday, 30 April 2015 16:14
Written by The Ridgefield Playhouse 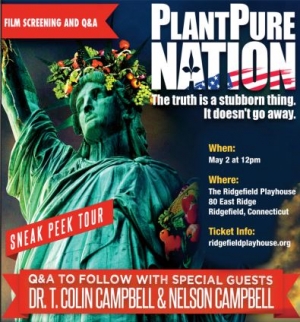 Come Rally at The Ridgefield Playhouse on Saturday, May 2 at 12:00 noon and learn about the positive impact of a whole foods, plant-based diet from one of the premier scientists at the forefront of this field.

Dr. T. Colin Campbell and Nelson Campbell, the film director, will address Ridgefield from the steps of The Playhouse at 11:15am followed by the screening and Q&A session.

With Support from Garden of Ideas and Simpaug Farms

From producer and writer of Forks Over Knives, PlantPure Nation tells the story of three people on a quest to spread the message of one of the most important health breakthroughs of all time. When nutritional scientist and respected author Dr. T. Colin Campbell inspires Kentucky State Representative Tom Riner to propose a pilot program documenting the health benefits of a plant-based diet, they inadvertently set in motion a series of events that expose powerful forces opposed to the diet. When industry lobbyists kill the pilot program, Dr. Campbell’s oldest son Nelson decides to try his own grassroots approach in his hometown of Mebane, North Carolina.