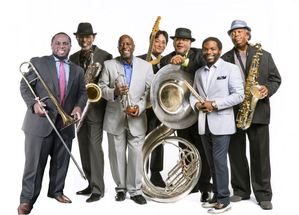 Three bands direct from New Orleans – Dirty Dozen Brass Band, Cha Wa and Joe Lastie’s New Orleans Sound -- are bringing Mardi Gras to the Ridgefield Playhouse on Wednesday, February 27th at 7:30pm!  For more than 40 years, the internationally renowned, New Orleans-based Dirty Dozen Brass Band has taken the traditional foundation of brass band music and incorporated it into a blend of Bebop Jazz, Funk and R&B/Soul. In addition to their genre-bending romps and high-octane performances, they are known for collaborations with Modest Mouse, Widespread Panic, Norah Jones and others! New Orleans brass band-meets-Mardi Gras Indian outfit, Cha Wa radiates the fiery energy of the best features of the city’s street culture. Preservation Hall Jazz Band hall-of-famer, Joe Lastie brings his drumming, along with a full band direct from NOLA for a night of traditional jazz, brass-band songs and gospel. The night is complete with Mardi Gras beads at the door and Hurricanes at the bar! This show is part of Moffly Media Evenings of Art Wine & Jazz. Media partner for this event is WPKN, The Real Alternative.

In 1977, The Dirty Dozen Social and Pleasure Club in New Orleans began showcasing a traditional Crescent City brass band. It was a joining of two proud, but antiquated, traditions at the time: social and pleasure clubs dated back over a century to a time when black southerners could rarely afford life insurance, and the clubs would provide proper funeral arrangements. Brass bands, early predecessors of jazz as we know it, would often follow the funeral procession playing somber dirges, then once the family of the deceased was out of earshot, burst into jubilant dance tunes as casual onlookers danced in the streets. By the late '70s, few of either existed. The Dirty Dozen Social and Pleasure Club decided to assemble this group as a house band, and over the course of these early gigs, the seven-member ensemble adopted the venue's name: The Dirty Dozen Brass Band. Their unique sound, described by the band as a ‘musical gumbo,’ has allowed the Dirty Dozen to tour across 5 continents and more than 30 countries, record 12 studio albums and collaborate with a range of artists. The Dirty Dozen Brass Band is Roger Lewis - Baritone Sax/Vocals; Kevin Harris - Tenor Sax/Vocals; Gregory Davis - Trumpet/Vocals; Kirk Joseph – Sousaphone; TJ Norris – Trombone; Julian Addison - Drums/Vocals; and Takeshi Shimmura – Guitar.

Joe Lastie has traveled the world with the Preservation Hall Jazz Band but still finds time for his own projects, including a recent stint with the Treme Brass Band and New Orleans Homegrown. And in 2015, he recorded the original single “New Orleans In Me,” written to commemorate the tenth anniversary of Hurricane Katrina.

For tickets ($39.50) call or visit the box office, 203-438-5795 or go online at ridgefieldplayhouse.org.  The Ridgefield Playhouse is a non-profit performing arts center located at 80 East Ridge, parallel to Main Street, Ridgefield, CT.