Details
Published on Monday, 17 December 2018 14:15
Written by The Ridgefield Playhouse 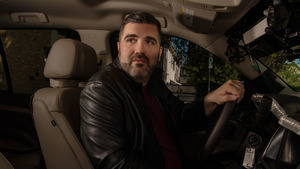 World-renowned medium Thomas John is a trusted advisor to influencers and celebrities, including Courteney Cox, Sara Gilbert and Goldie Hawn. He stars on Lifetime’s “Seatbelt Psychic,” surprising unsuspecting ride-share passengers with readings. Now you can see him in person for a night of live audience readings and insight on connecting to the spirit world at The Ridgefield Playhouse Sunday, January 13 at 7:30pm, part of Hearst Media Entertaining Conversation Series and Adam Broderick Whole New You Series partially underwritten by Reliance Merchant Services. Visit Southwest Cafe (109 Danbury Road, Ridgefield) for dinner before the show and enjoy a complimentary margarita with your entree when you show your ticket!  Media partner for this event is I95, The Home of Rock N’ Roll.

Thomas John is a global psychic sensation who has wowed audiences across the world with his impressively accurate messages from “the other side.” Hosting sold-out events such as A Night with Spirit, Spirit Circles and Dinner with the Dead, Thomas John is one of the nation’s most coveted psychic mediums. His gifts continue to be in high demand with influencers, A-list celebrities, and those at a crossroads in life, from coast to coast and around the globe.

In recent years, Thomas’ infallible track record, ethics, and down-to-Earth approach as a psychic medium has led to him being known as one of the world’s top psychics and earned him an honorable reputation in the industry. He has made innumerable accurate psychic predictions about celebrities that have come to pass, often months after he has reported them to the media, including the death of Whitney Houston, the splitting of Tom Cruise and Katie Holmes, the death of Michael Jackson, and the circumstances surrounding the birth of the royal babies. Thomas John has also had countless visions surrounding medical breakthroughs, political events, and natural disasters, which have come to pass in record time. Enjoy a night of surprises and psychic prediction, next January at The Ridgefield Playhouse.

For tickets ($45-$125), call or visit the box office, 203-438-5795 or go online at ridgefieldplayhouse.org.  The Ridgefield Playhouse is a non-profit performing arts center located at 80 East Ridge, parallel to Main Street, Ridgefield, CT.