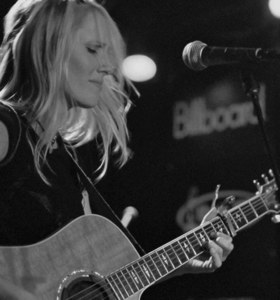 A free “Hope Concert for Mental Illness” will bring awareness to the challenges of mental illness during an evening of inspirational music and reflections on Sat., May 18 at The Ridgefield Playhouse.

Headlining the concert is award-winning singer-songwriter Elza, loved by audiences for her unique bluesy/jazzy/Americana blend that she calls “acoustic soul.”

In addition, Maggie Taylor from Advocacy Unlimited Inc. in New Britain and other guest speakers will address ways to conquer the stereotypes, fear, stigma and shame of mental illness. State Sen. Will Haskell (D-26) is tentatively expected to attend and speak about Connecticut’s legislative priorities around mental health.

“This is the third year we’re bringing together amazing musical talent and gifted speakers who engage and inspire, all in the name of better understanding mental illness,” said Kate Mattias, executive director of the National Alliance on Mental Illness (NAMI) Connecticut. “Audience members leave with hope in their hearts, and practical insights in their heads.”

Held during Mental Health Awareness Month, the concert is sponsored by Jesse Lee Memorial United Methodist Church in Ridgefield, in association with the NAMI Connecticut chapter.

Although the concert is free, tickets are required. Reserve yours at http://bit.ly/JesseLeeHope.

With a world-class voice singing melodies you'll hum for days, Elza is one of those special artists that touches you with the first note and holds you spellbound until the last. Although classically trained (and NY winner of the National MacAllister Opera Awards), she eventually returned to her first love of being a singer-songwriter.

Her song “The Other Side” was a grand-prize winner in the 2016 International Music Licensing Songwriting Competition. Besides performing, Elza also writes and records music for TV and Film. She has written songs for such shows as “Hopkins,” “Boston Med” and “NY Med,” and her music was featured on “Smallville.” Learn more at www.elzamusic.com.