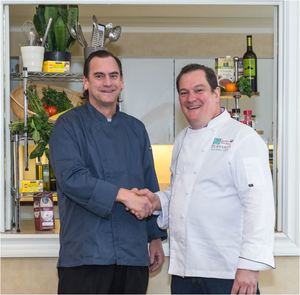 In a culinary showdown similar to those featured on television shows such as Top Chef and Chopped, three seasoned culinary teams will match sharp knives and quick wits for the benefit of Founders Hall in the 2019 Battle of the Chefs on Sunday, June 2, from 4 – 7 pm.

Jehan de Noüe, JSN Catering/Albano Appliance, Sal Bagliavio, Bailey’s Backyard, Bernard Bouïssou, Bernard’s Restaurant Sarah Bouïssou, Sarah’s Wine Bar, Frank Bonnaudet, Sucre Sale, and Art Michaelsen, Bartolo will open a basket of surprise ingredients in front of an audience of over 200 and, in just 60 short minutes, compete to create the winning entree as judged by a panel of food experts.  Renowned judges, audience participation and the chance to provide life-long learning to over 3,600 people will make this a rollicking, mouth-watering, soul-satisfying event.

How are the chefs preparing? What is their "recipe for success"? Find out right here on HamletHub as we showcase each culinary team!

Do you know your fellow chef?

Yes, since Sarah competed against him in the first Battle of the chefs (which she won!)

You’ve competed in the Battle before! Did you win?

Why will you win on June 2?

We are a super strong team!

How are you preparing for this much anticipated culinary showdown?

Are your kids taking sides? Any family wagers on the battle?

The girls will all be here cheering us both on! We don’t know about any favoritism – we’ll see on June 2!

What do you hope is in your basket of surprises? Anything you don’t want?

Anything is will be fun to work with – we are just looking to have a great day and raise some money for Founders Hall!! Hopefully, there won’t be any too bizarre in the basket!

Do you know your fellow chef?

Yes, I know my fellow chef but not personally.

You’ve competed in the Battle before! Did you win?

I did compete, but unfortunately, I did not win.

Why will you win on June 2?

I will win because I have been training for a rematch since the day I lost!

How are you preparing for this much anticipated culinary showdown?

I'm preparing in my daily routine!

What do you hope is in your basket of surprises? Anything you don’t want?

I would hope for something chocolate in my basket of surprises and I definitely don't want sea urchins.

What is your recipe for success?

My recipe for success is to work cohesively with my partner.

Battle of the Chefs is Founders Hall's marquee live culinary competition event. Now in its seventh year, the format of the 2019 Battle of the Chefs will be a first-of-its-kind: Six extraordinary chefs, who’ve competed at the event in the past, have been paired up in a random drawing. The 'dueling duos' pictured below will compete in an exciting, fast-paced cooking competition.

Purchase your tickets to the Battle HERE.