Details
Published on Thursday, 11 July 2019 17:16
Written by The Ridgefield Playhouse 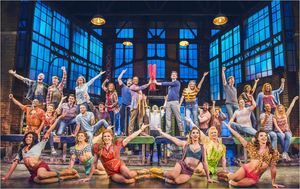 The Grammy, Olivier and 6 x Tony, Award-winning musical Kinky Boots is coming to the big screen at The Ridgefield Playhouse Friday, August 9th at 7:30pm. Don’t miss Broadway’s huge-hearted, high-heeled hit, captured in HD at London’s Adelphi Theatre, with songs by Grammy and Tony-winning pop icon Cyndi Lauper. After the screening hear a live talk back with the man who came up with the concept and wrote the book for the show, Broadway legend and four-time Tony Award-winner (and Ridgefield Playhouse Artistic Advisory Board member), Harvey Fierstein! He’ll talk about how he was inspired by the little-seen 2005 movie of the same title, “Kinky Boots” which was based on true events, and how his meeting with Cyndi Lauper after her 2010 performance at The Ridgefield Playhouse spawned this show about finding your passion, overcoming prejudice and transcending stereotypes. This incredible event is part of Ridgefield Magazine Broadway & Cabaret Series and Hearst Media Entertaining Conversation Series.

This West End production stars Olivier Award winner Matt Henry as Lola and Killian Donnelly as Charlie, with direction and choreography by two-time Tony Award-winner Jerry Mitchell (Legally Blonde, Hairspray.)  The musical tells the story of Charlie Price, who, having inherited a shoe factory from his father must find a way to save the business. Charlie joins forces with an unlikely partner, cabaret and drag performer Queen Lola, to produce a line of high heeled-boots that saves far more than just the shoe factory.