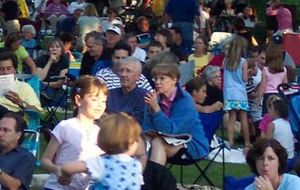 Whether alone with just the guitar and his voice or surrounded by a full band, Cris Jacobs enchants listeners with his inspired, poignant songwriting, virtuous guitar playing, and soulfully transcendent voice. After a decade, five records, and 200 shows a year as principal songwriter and frontman for Baltimore-based band The Bridge from 2001-2011, Jacobs is now writing music for his own band that is reflective of the issues that concern him today.

Town Mountain have made a name for themselves in bluegrass and roots circuits and have amassed a sizable catalog of original songs. They’ve toured with a who’s who of like-minded artists, including Ralph Stanley and His Clinch Mountain Boys, the Del McCoury Band, Greensky Bluegrass, Yonder Mountain String Band, and many others. In 2016, Town Mountain made their Grand Ole Opry debut, performing both at the Opry House and at the famed Ryman Auditorium. Rolling Stone says Town Mountain brings “A fresh perspective on fast-fingered traditional bluegrass, with forays into rockabilly and old-school country.”

Rain venue: RP. Underwritten through the great generosity of the Ridgefield Thrift Shop

CHIRP is a series of free Tuesday and Thursday night summer concerts in Ballard Park located in the heart of Ridgefield. It also sponsors the U.S. Military Band concerts held several times a year at the H.S. Auditorium.  CHIRP is totally funded by individual and foundation donations as well as contributions from local businesses. Concerts begin at 7pm.