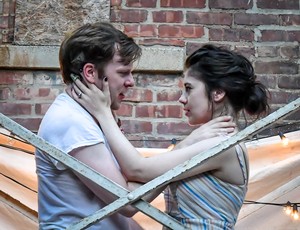 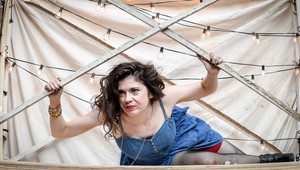 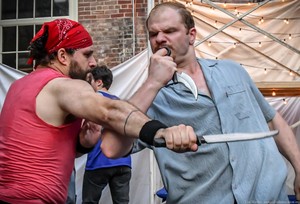 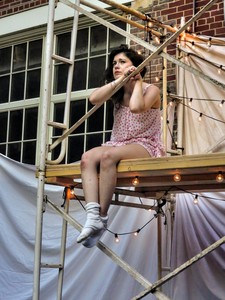 Shakespeare in the Parking Lot will present "Romeo and Juliet," directed by Lukas Raphael, September 21.2019 at 4:00pm as part of the 2019 Michael Chekhov Festival in Ridgefield.

This is the 11th year of the festival and the fourth year TDC has joined with TMCTF to bring FREE Shakespeare to Ballard Park. This popular New York summer institution is now in its 25th year. Its concept--presenting Shakespeare plays with a "poor theater" aesthetic in a working parking lot--is now widely imitated around the US and around the world, with productions as far away as New Zealand.  The Drilling Company, led by Artistic Director Hamilton Clancy, has produced the attraction since 2005.

The play exquisitely demonstrates the futility of partisanship, pleading for similar people to stop killing each other for reasons they no longer remember.

Director Lukas Raphael will set the play in New York in the early 1990's, with the Montagues and Capulets imagined as families of a Lower East Side neighborhood.  In this concept, the Capulets (Juliet's people) are long-standing stewards of the neighborhood.  Romeo's Montagues, on the other hand, are upwardly mobile, eager to rise above it. Raphael once directed "Romeo and Juliet" in North London as a Tango musical set in Buenos Aires. This time, he sees his job as telling a fast, gritty story clearly and succinctly, stressing its language and incorporating sounds of the street and city to provide the backdrop. Instead of duels with swords, he will have knife fights choreographed by Frank Alfano, who staged the fights in an Off-Broadway adaptation of "A Clockwork Orange" in 2015. The cast is an ensemble of Drilling Company artists who have been honed through the years in many Drilling Company and Shakespeare in the Parking Lot productions.

Director Lukas Raphael grew up in Leipzig, Germany and found Shakespeare while in school in the Isle of Man. He trained at the University in Exeter, LAMDA, Guildhall School of Music and Drama, the Academia Dell’Arte and later the Atlantic Theater Company Conservatory. He was the Artistic Director of a theater company in England (2006-2010) before moving to New York in 2012. His directing credits include: "The Tempest" (The Drilling Company in Bryant Park), "The Anger in Ernest and Ernestine," "The Triumph of Death," "Tryst" (independent feature film), "Romeo and Juliet de Buenos Aires," "A Midsummer Nights Dream," "Titus Andronicus" and "As You Like It!" Beside Shakespeare in the Parking Lot and The Drilling Company, he has acted with several UK companies and several regional theaters in the US.

ABOUT THE DRILLING COMPANY

Beside producing Shakespeare, The DrillingCompany(www.drillingcompany.org), led by Artistic Director Hamilton Clancy, is an incubator of new American plays.  It produced new works in an intimate theater space at 236 West 78th Street, formerly 78th Street Theater Lab, from 1999 to 2014 and is presently seeking new digs for this aspect of its work.  Last season, it presented "Gabriel: A Polemic" at North of History, a "popup" gallery and performance space located at 445 Columbus Ave. (between 81st and 82nd Street), near its 15-year home. The company is also the exclusive producer of Shakespeare plays for Bryant Park Presents Shakespeare.

Audience members often arrive early to secure a spot and are welcome to bring their own chairs, picnics or blankets.