Variation: An Evening of Enganging Chamber Music in Ridgefield on Nov. 2 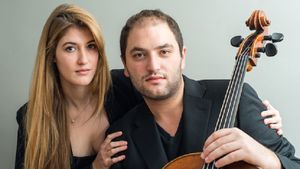 The performance will be held on Saturday, November 2, 2019 at 7:30 PM at St. Andrew’s Lutheran Church (6 Ivy Hill Road, Ridgefield, CT) and will include both classical and contemporary works.

Julian Schwarz made his concerto debut at age 11 with the Seattle Symphony. Since winning first prize at the inaugural Schoenfeld International String Competition, he has given over 150 concerto performances in the United States and abroad, including a debut tour with the Moscow Radio Symphony in 2010. He is an ardent supporter of new music and has premiered concertos by Richard Danielpour, Samuel Jones, Dobrinka Tabakova, and recently gave the world premiere of Lowell Liebermann’s first Cello Concerto with a consortium of six orchestras. As a chamber musician, Mr. Schwarz is a founding member of the Frisson Ensemble and the Mile-End Trio, and is a member of the Palladium Chamber Players. He performs frequently at Bargemusic in Brooklyn and in recital with pianist Marika Bournaki. In 2016, the Schwarz-Bournaki duo was awarded first prize at the inaugural Boulder International String Competition’s “The Art of Duo” and subsequently embarked on an extensive recital tour of China. Schwarz is known to Ridgefield in that he appeared as soloist with the Ridgefield Symphony Orchestra in October 2017 performing Elgar’s Cello Concerto.

Named “the Celine Dion of classical” by The Huffington Post, world-class Canadian pianist Marika Bournaki is known for the combination of her effervescent youth and innovative approach to her art.

Her evolution into an esteemed performer was documented by Bobbi Jo Hart, from the age of 12 to 20, for the multi award-winning feature-length documentary “I Am Not A Rock Star” and was a huge success at multiple international film festivals as well as being featured on BBC Four. Ms. Bournaki appears frequently as a soloist, as a duo with partner cellist Julian Schwarz and, along with Schwarz, is a founding member of the Mile-End Trio with third member violinist Jeffrey Multer. Ms. Bournaki serves on the piano faculty of the Eastern Music Festival in Greensboro, NC, is an artist in residence at the Lunenburg Academy of Music Performance in Nova Scotia, and is a frequent guest artist at Bargemusic where she is currently presenting a complete cycle of the 32 Beethoven Sonatas. She is also a member of Piano Six’s new generation, a touring ensemble that brings classical musical to remote and underserved Canadian communities.

The concert is open to the public and all are invited to attend. To keep the concert accessible to all, tickets are only $20 for adults, $10 for seniors and $5 for students, and can be purchased in advance at https://charlesivesmusicfestival.org/events/ or at the door the evening of the concert.