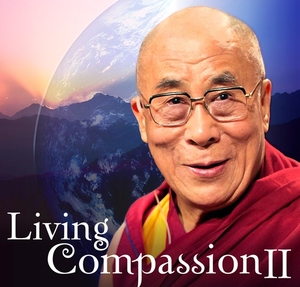 Living Compassion II is an exploration of compassion featuring Tencho Gyatso, niece of His Holiness the Dalai Lama, building on a 2017 program at the Ridgefield Playhouse. In a more immersive and contemporary look at her uncle’s life, Tencho’s highly personal narration will be interwoven with stunning visual images. This heartfelt presentation will be accompanied by the deeply moving music of Nawang Khechog, the first Tibetan Grammy Nominee and the most renowned Tibetan flutist in the world. His original music fits perfectly with the compassionately lived life of the Dalai Lama. Tickets to the event are $35 and $55 (includes VIP reception) and can be purchased at +ridgefieldplayhouse.org.

In addition, there will be a free round-table discussion, hosted by the International Campaign for Tibet. This special presentation, entitled Tibet Today, is a thought-provoking program which will allow participants to engage with experts on the destruction of Tibet’s unique and rich cultural and religious traditions. Tickets can be reserved at dnkl.org.

This event is presented by Do Ngak Kunphen Ling (DNKL) Tibetan Center for Universal Peace to help raise much needed funds to support the compassionate work being done by DNKL in Redding, CT, and other locations around the world. For more information and sponsorship opportunities, please visit dnkl.org. DNKL is a 501(c)(3) non-profit organization.

His Holiness the 14th Dalai Lama, Tenzin Gyatso, is the spiritual leader of the Tibetan people. He was born Lhamo Dhondrub on 6 July 1935, in a small village called Taktser in northeastern Tibet. Born to a peasant family, His Holiness was recognized at the age of two, in accordance with Tibetan tradition, as the reincarnation of his predecessor the 13th Dalai Lama, and thus an incarnation of Avalokitesvara, the Buddha of Compassion. Forced into exile in 1959 by the Chinese communist colonization of Tibet, which continues to this day, he has continued to inspire the Tibetan people as well as millions of others the world over. In 1989 he received the Nobel Peace Prize. His unwavering advocacy for a non-violent and compassionate approach to conflicts throughout the world, including in our own personal lives, is the basis for true happiness.

ABOUT THE PERFORMERS
Tencho Gyatso, the niece of His Holiness, the Dalai Lama and Director of Tibetan Empowerment & Chinese Engagement Programs for the International Campaign for Tibet, which promote human rights and democratic freedoms for the Tibetan people. She is also founder of the Tibetan Children's Village.

Born in Dharamsala, the seat of His Holiness the Dalai Lama and the exile Tibetan administration, Tencho was educated at the Tibetan Children’s Village school and St Bede's College in Shimla, India. She served as an elected member of the Tibetan Parliament-in-exile for two terms during which, along with her other work, she traveled widely to Tibetan settlements in India, and to speak on behalf of Tibet to various governmental and NGO groups in Europe and the United States.
She moved to the United States in 1999 to join her husband, Losang Gyatso, a contemporary Tibetan artist. She and her family currently live in Washington DC.

Nawang Khechog is the first Tibetan Grammy Nominee and the most renowned Tibetan flutist in the world. He has won multiple awards in Tibet, India, Nepal and the United States. He is one of Tibet's foremost world and spiritual music composers. He is also one of the first Tibetan musicians to be able to gain great success in the International music scene with his original musical compositions.
Nawang was a monk for eleven years and studied Buddhist philosophy and meditation with His Holiness the Dalai Lama and many other Tibetan masters. He also lived as a hermit, meditating in the Himalayan foothills for several years under the guidance of His Holiness.
He aims to utilize music as a means to inspire non-violence, compassion and spirituality and for the freedom of Tibetan people. Nawang has produced and performed on many albums as a solo artist and with others, receiving many awards, including a Grammy nomination. Nawang’s website has a wealth of additional information – http://nawangkhechog.com