Join Mary Owen, daughter of Donna Reed, for December 22 screening of It’s A Wonderful Life at The Ridgefield Playhouse!

Details
Published on Saturday, 14 December 2019 07:28
Written by The Ridgefield Playhouse 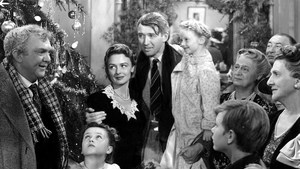 A holiday classic for the whole family! Join Mary Owen, daughter of Donna Reed, for the Sunday, December 22nd 4pm screening of It’s A Wonderful Life at The Ridgefield Playhouse! A holiday classic for the whole family! Frank Capra directs this beloved story of redemption and second chances, with James Stewart as George Bailey, a man at the end of his rope one Christmas Eve. Donna Reed co-stars as Mary Hatch, the high-school sweetheart who became his wife. Reed’s daughter, Mary Owen, an expert on the film, will introduce the movie, putting it into historical perspective, and will answer questions live on The Playhouse stage following this screening! This screening is part of Cohen and Wolf P.C. Movie Series, Joseph Consentino Film Society Series and Hearst Media Entertaining Conversation Series.

One of the most treasured holiday films, It’s A Wonderful Life is the story of George Bailey, a man who has given up his dreams to help others, and whose imminent suicide on Christmas Eve brings about the intervention of his guardian angel, Clarence Odbody (Henry Travers). Clarence shows George all the lives he has touched, and how different life in his community of Bedford Falls would be if he had never been born. The film co-stars Donna Reed as Mary, George’s childhood sweetheart, and later wife, who marshals George throughout all difficulties.

Mary Owen is the youngest daughter of actress Donna Reed and producer Tony Owen. In addition to introducing the film and answering questions after it screens, she will also read letters her mother received from soldiers and sailors during WWII. Owen found the letters after her mother died in 1986 -- more than 350 of them, carefully saved for more than 40 years.

For tickets ($12) call or visit the box office, 203-438-5795 or go online at ridgefieldplayhouse.org.  The Ridgefield Playhouse is a non-profit performing arts center located at 80 East Ridge, parallel to Main Street, Ridgefield, CT.