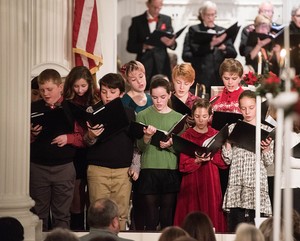 St. Stephen’s Episcopal Church is presenting Carols by Candlelight on Saturday, Dec. 14, at 7:30 p.m. in the church’s sanctuary at 351 Main St. in Ridgefield.

The concert is a celebration of Advent and Christmas presented by the St. Stephen’s Festival Choir, St. Stephen’s Choristers, soloists, and an 18-piece professional orchestra. Dr. Alcee Chriss III, St. Stephen’s Minister of Music, will conduct, and Dr. Nathaniel Gumbs, Director of Chapel Music at Yale University, will play the organ.

The concert opens in candlelight as the choirs process while singing “Once in Royal David’s City.” It will include selections from J.S. Bach’s “Wachet Auf, BWV 140,” Handel’s “Messiah” and works by Gustav Holst, and Edward Elgar. Traditional carols will be interspersed throughout the concert, which will conclude with a rousing performance of “Hallelujah,” from “Messiah.”

There is no admission charge, although a $20 donation is suggested.

Caption: The St. Stephen’s Choristers will be featured at the annual Carols by Candlelight concert. Photo by Scott Mullin