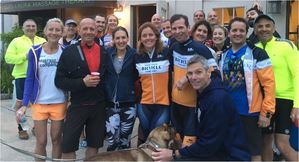 Current members and anyone interested in finding out more, are invited to hear about offerings and updates for the 2020 season. Food and beverages by club sponsors, Southwest Cafe, The Cake Box and Ancona’s Wine and Liquors will be on hand.

The Ridgefield Bicycle Sport Club was born when a friend of owner’s Sean and Jacqui Dowd and TriRidgefield founder, Evan McGerald, pondered about taking the shop's rides to a new level. He thought the shop could organize a club where local athletes could join together as a team. Members could ride, race, train and socialize. Nine years and a yearly membership of 435 athletes later, RBSC has become a solid community for all levels of athletes.

RBSC is one of the largest cycling clubs in the country. It is home to six weekly road and mountain bike rides, bi-weekly track run workouts, educational clinics, winter spins, destination rides and the ever-popular Thirsty Thursday Ride. The newest addition are rides that go to the back dirt roads where traffic is light and the riding is not too technical. The club caters to beginner through pro levels.

“The true essence of this club is the people who make it a welcoming and seriously fun culture to be a part of while honoring our mission of safety, respect and responsibility,” says RBSC founding member, Jacqui Dowd.

More information can be found at www.rbsclub.org.