Poet Jericho Brown Will Host Workshop and Reading at The Aldrich on Feb. 13 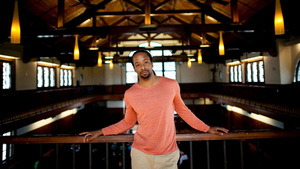 The Aldrich Contemporary Art Museum is pleased to announce that American Book Award-winning poet Jericho Brown will host a masterclass workshop and poetry reading on Thursday, February 13 at the Museum. Registration is required for both events at www.shop.aldrichart.org.

In the masterclass workshop, which will take place from 1 to 3 pm on February 13, Jericho Brown will help students generate new work through a set of unconventional exercises that keep their ears open and fingers moving. The workshop engenders new ideas about writing, and as there is a profound relationship between reading poetry and writing it. Participants will read, discuss, and even recite the work of several poets whose examples might lead them to a further honing of their craft. The workshop also features exercises for writing the duplex, a form Brown invented that blends the ghazal, the sonnet, and the blues. ways to repurpose good but failed lines in new poems and use the duplex as a catalyst for our conversation.

From 7 to 9 pm on February 13, Brown will conduct a poetry reading followed by a Q&A and a book signing. Ridgefield’s Books on the Common will be on site selling his latest poetry collection, The Tradition.

“There are countless poets of the body, but the body in Brown’s poetry serves as a nexus of the corporeal and conceptual. The ‘body’ of his work isn’t just a physical, individual one; it’s a stand-in for various (flawed) institutions of power and belief: national history, religion, mythology, the justice system.” —The New York Times

Jericho Brown is the recipient of fellowships from the Guggenheim Foundation, the Radcliffe Institute for Advanced Study at Harvard, and the National Endowment for the Arts, and his is the winner of the Whiting Writer’s Award. Brown’s first book, Please (New Issues 2008), won the American Book Award. His second book, The New Testament (Copper Canyon 2014), won the Anisfield-Wolf Book Award. His third collection is The Tradition (Copper Canyon 2019). His poems have appeared in The Bennington Review, Buzzfeed, Fence, jubilat, The New Republic, The New York Times, The New Yorker, The Paris Review, TIME magazine, and several volumes of The Best American Poetry. He is an associate professor and the director of the Creative Writing Program at Emory University.