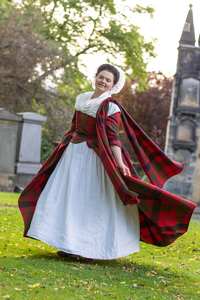 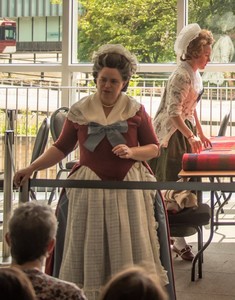 Keeler Tavern Museum & History Center is pleased to announce that Rebecca Olds, an independent researcher and designer of 18th-century reconstructed clothing for film and reenactments, will present The Isabella MacTavish Fraser Wedding Project at KTM&HC on March 3 in the Garden House. Doors will open at 5:30; the program runs 6 to 8. Tickets are $25 and available online at keelertavernmuseum.org/events or by calling 203.438.5485.

The Isabella MacTavish Fraser wedding gown is a vibrant tartan gown worn by Isabella MacTavish in a small town in the Scottish Highlands in 1785. The gown survives to this day, has been worn by a succession of brides, and is still owned by Isabella and Malcolm’s direct descendants. It is the only known pre-1800 extant example of such a gown.

Ms. Olds, who will be visiting KTM&HC from Great Britain, led a team of historical dressmakers to recreate this iconic gown. This event offers a unique opportunity to see photos of the original gown with the 2019 recreation. Ms. Olds will discuss the collaboration that took place between maker and wearer of the dress—challenging perceptions of the so-called backward ways of people in the Highlands, and rebutting the devaluation of “women’s work” that has occurred since the end of the female-dominated trade of mantua-making. It is Ms. Olds’ first scheduled presentation this year in the Northeast.

“I am so excited to have Rebecca discuss the Isabella gown at KTM&HC,” said Melissa Houston, director of education at KTM&HC. “The gown was sewn in approximately 1785 – at the time when Timothy was running Keeler Tavern and Esther gave birth to their son, Thaddeus. The style was popular in both the U.K. and the former colonies; seeing the recreation in historical context will illuminate the story of gender and opportunity through the study of the mantua-makers trade.”

Ms. Olds similarly views her craft in a larger educational context. “My aim is to initiate discussions about how women's garments like Isabella’s were made in the 18th century, not only with those who already have an interest in the period or in fashion history, but with the general public,” she said. “The project is not a careful study of a garment in an isolated museum but serves to engage with our own cultural heritage and personal experiences.”

Tickets for the presentation by Ms. Olds will be available online at the KTM&HC website and include refreshments and a Q & A with Ms. Olds. The public, especially those interested in period clothing, are encouraged to attend this not-to-be-missed event. Costumes welcomed.

Proceeds will support KTM&HC’s education program which offers a living-classroom experience for nearly 2500 students throughout Fairfield County, including Title 1 schools in Danbury and Bridgeport. KTM&HC provides full-day, immersive, curriculum-aligned programs developed in partnership with teachers for students Pre-K through Grade 12. These programs ensure an education rich in history and civics to help students become well-informed, civic-minded, and eager to engage in our democratic traditions.

KTM&HC tells 300 years of the town’s—and nation’s—history through the lives of its past residents. The 4-acre historic site, including the Keeler Tavern Museum, Cass Gilbert-designed Garden House, Carriage Barn and Gardens, is open for visitors Wednesdays, Saturdays, and Sundays from 1:00 to 4:00 p.m. Additional information about the site, including rental of the Cass Gilbert-designed Garden House and Walled Garden for private events, can be found at keelertavernmuseum.org or Facebook.com/KeelerTavernMuseum. Follow KTM&HC on Facebook, Instagram, and Twitter.

Rebecca Olds is the founder, designer, and dressmaker at Timesmith Dressmaking. She is an independent “original practice” researcher and maker of reconstructed historical clothing of the 18th century. She specializes in the study of women’s garments, underpinnings, and millinery of this period and tests her understanding of period construction techniques through recreation or reconstruction of extant objects held in public and private collections. She is currently researching non-elite women’s dress in mid-18th century Scotland.