Details
Published on Friday, 03 July 2020 11:32
Written by The Ridgefield Playhouse 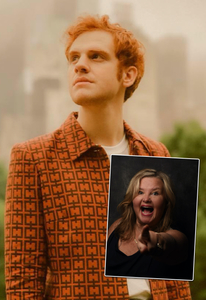 While the State of Connecticut is still planning the next phases of reopening venues and the guidelines for indoor concerts, outdoor concerts have been given the green light to begin this summer!

The Ridgefield Playhouse will be doing a special evening of music and comedy – its first live presentation since early March – with 2019 American Idol finalist Jeremiah Lloyd Harmon and comedian Christine O’Leary on Saturday, July 25 at 7pm.

The outdoor concert, part of the Bandsintown Emerging Artist Series, Doyle Coffin Architecture Singer Songwriter Series and Barts Tree Service Comedy Series, will take place on the field adjacent to The Playhouse, with seating under a tent. The night will kick-off with award winning standup comedian Christine O’Leary who was recently featured in Curve Magazine as one of the “50 Funniest Lesbians in America.”

O’Leary has worked with many top comedians in the business, including Tracy Morgan, Margaret Cho, Gilbert Gottfried, Joy Behar, Susie Essman, Chevy Chase, Sinbad, Janeane Garofalo and many more. In addition to performing, O’Leary teaches stand-up comedy classes, and is the Host/Announcer/Comedy Series Artistic Director at The Ridgefield Playhouse! Harmon and O’Leary will be reuniting after performing at a star-studded gala event in New York City last year.

Jeremiah Lloyd Harmon wowed audiences and judges with his vocal range and emotional backstory, breaking through American Idol’s Top 10. After that, every move he made seemed to have a massive reaction. After singing Elton John's "We All Fall In Love Sometimes" Harmon received a phone call from Sir Elton and a public declaration that the performance, "Took my breath away." He caught the attention of Academy Award-nominated actress and Tony Award-winner Cynthia Erivo and the pair sang the Cyndi Lauper hit "Time After Time" as a duet. After seeing him on American Idol, Dear Evan Hanson star, Ben Platt invited Harmon to perform with him in San Francisco during Platt's tour; they did a duet of Bob Dylan’s ballad "Make You Feel My Love."

Jeremiah Lloyd Harmon’s talent caught the eye of actor/director/producer Tony Goldwyn (Scandal, Chambers) and his wife production designer Jane Musky (When Harry Met Sally, Glengarry Glen Ross, Hustlers).  They, along with longtime activists and philanthropists Frank Selvaggi and Bill Shea  (Gay & Lesbian Victory Fund, Freedom to Marry, Autism Speaks), have championed his career and we gratefully acknowledge their support of this performance. Visit Eddie’s Pizza & Pasta (24 Prospect Street, Ridgefield) the night of the show and enjoy a complimentary glass of house wine with your entrée with your tickets.

Often compared to Jeff Buckley, Freddy Mercury and Bill Joel, Harmon has been making the rounds with intimate performances and gaining celebrity fans in the process! Dan Finnerty of The Dan

Band says it best, “we all know that America doesn’t always get the vote right. Even on Idol. Performers like Jennifer Hudson, Adam Lambert and Katharine McPhee have shown you don’t need to take home the trophy to be the best one.  Add Jeremiah Lloyd Harmon to that list. This guy is the real deal and you’ll kick yourself later for not seeing him while you can still afford the ticket.”  Sarah Jessica Parker and husband Matthew Broderick add, “Jeremiah is a true talent. A talent that deserves to be heard.”

Recently, Harmon has focused his attention on recording his first album --after his eponymous debut 4-song EP-- again with producer Chris Schlarb, at a house in Joshua Tree in the California desert. This album is stripped down compared to the last recording which made use of horns, a string orchestra and a grand piano. For “Namesake” the setup is minimal: a couple acoustic guitars, drums, bass, a keyboard and some percussion. Harmon tells Billboard, “It's about being out on an adventure, getting away from the noise for a bit and trying to tune into that inner voice.”

Hailing from Alexandria Louisiana, Harmon grew up the oldest son of four in a family whose life centered around the Christian church. He worked as a church janitor while practicing his singing chops alone in the acoustically sonic building that ultimately resulted in his release of “Almost Heaven” which he performed on “American Idol.” The song asks if there is a place for gay people in Heaven and deals with the struggle of being gay and Christian. Harmon became estranged from his family after coming out to them and finding rejection instead of acceptance (though they have since reunited). Moving to Lynchburg Virginia, he began songwriting and performing at the Lynchstock Music Festival. In August 2017, he released his EP, a folk-jazz fusion project with Virginia record label Harding Street Assembly Lab. In August 2018 he released a single, "Learn to Love" recorded at Glass Village Studios.

In 2019, Queerty magazine named Harmon, one of the Pride50 "trailblazing individuals who actively ensure society remains moving towards equality, acceptance and dignity for all queer people.”

For tickets ($25) call or visit the box office, 203-438-5795 or go online at ridgefieldplayhouse.org. The Ridgefield Playhouse is a non-profit performing arts center located at 80 East Ridge, parallel to Main Street, Ridgefield, CT.