Details
Published on Sunday, 02 August 2020 10:29
Written by The Ridgefield Playhouse 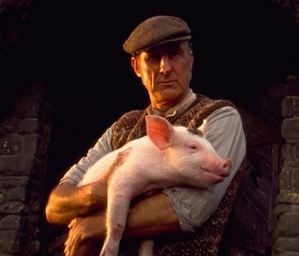 Twenty-five years after its original release in 1995, the Academy Award-winning film “Babe” returns to the big screen once again!  The TCM Big Screen Classic comes to The Ridgefield Playhouse on Wednesday, August 12 at 7pm as part of the Bruce Bennett Nissan Family Series sponsored by Recess Playworks and the Cohen and Wolf, P.C. Movie Series.

The film also includes exclusive insights from TCM. The film centers on a sweet-hearted and shy pig named Babe who doesn’t quite know his place in the world.  When Farmer Hoggett (James Cromwell) wins him at the county fair, Babe discovers that he can be anything he wants to be – even an award-winning sheepdog! With the help of a delightful assortment of barnyard friends, the heroic little pig is headed for the challenge of his life in this endearing and fun-filled tale the whole family will love.  “Babe” is funny, memorable and heartwarming, all while teaching lessons about tolerance and acceptance.

“Babe” was so beloved that it was nominated for an Academy Award for Best Picture — when only five movies were nominated — and in six other Oscar categories in 1996. (It won Best Visual Effects.).  At the time of the film’s release, Roger Ebert said “‘Babe’ is a movie made with charm and wit, and unlike some family movies it does not condescend, not for a second.”

“People fell in love with the movie in a way few movies ever experience,” The Decider wrote about the film. “And if there had been social media back then? Forget about it? Little Babe would have been crowned King of Memes and carried off to live on a throne somewhere in Buzzfeed headquarters.”

For more information or to purchase touchless print at home ticket ($10 in advance, online or $12 at the door) go online to www.ridgefieldplayhouse.org or, you can visit or call the box office (203) 438-5795.  The Playhouse is currently doing socially distanced seating, so all patrons will be seated by an usher on a first come first served basis and concession/bar can be ordered via our mobile site so that you can pick it up on the way in, or get notified when it is ready for you to pick up once in the theater.  The Ridgefield Playhouse is a non-profit performing arts center located at 80 East Ridge, parallel to Main Street, Ridgefield, CT and is committed to keeping the arts alive and available to all.