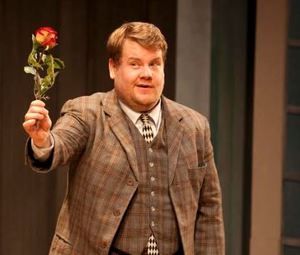 The host of “The Late Late Show” on CBS is the star of One Man, Two Guvnors - one of the funniest productions in National Theater history! The Ridgefield Playhouse is bringing the feel-good production back to the big screen on Saturday, August 8 at 8pm as part of the Northern Trust Broadway and Cabaret Series with support from Teed & Brown.

In 2012, Corden won a Tony Award for Best Lead Actor in a Play Tony for his role as Francis Henshall.  Fired from his skiffle band, Henshall becomes minder to Roscoe Crabbe, a small-time East End hood, now in Brighton to collect £6,000 from his fiancée’s dad. But Roscoe is really his sister Rachel posing as her own dead brother, who’s been killed by her boyfriend Stanley Stubbers.

Holed up at The Cricketers’ Arms, the permanently ravenous Francis spots the chance of an extra meal ticket and takes a second job with one Stanley Stubbers, who is hiding from the police and waiting to be reunited with Rachel. To prevent discovery, Francis must keep his two guvnors apart.  Simple.

The Playhouse is currently doing socially distanced seating, so all patrons will be seated by an usher on a first come first served basis and concession/bar can be ordered via our mobile site so that you can pick it up on the way in, or get notified when it is ready for you to pick up once in the theater.  The Ridgefield Playhouse is a non-profit performing arts center located at 80 East Ridge, parallel to Main Street, Ridgefield, CT and is committed to keeping the arts alive and available to all.