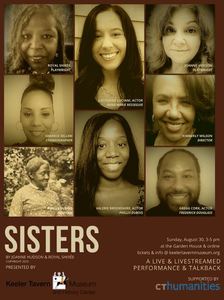 Tickets are on sale now for a LIVE and LIVESTREAMED performance on Sunday, August 30, at 3 PM of SISTERS, a play written by Joanne Hudson and Royal Shirée. Based on the life of Phillis Dubois and Anna Marie Resseguie, who lived together at the Resseguie Hotel (formerly Keeler Tavern) in the 19th century, the play has particular relevance today. Tickets are $40 for a LIVE ticket and $30 for a LIVESTREAMED ticket. The play will be followed by a talkback with the cast and crew moderated by director Kimberly Wilson.

SISTERS is a collaboration between two playwrights, Joanne Hudson and Royal Shirée, that seeks to shed light on race and privilege in America through the fictional story of two real women, one white and one black - Anna Marie Resseguie and Phillis DuBois - who lived in and ran the Resseguie Hotel in Ridgefield, Connecticut before, during, and after the Civil War. Having never met, other than online, the two

playwrights collaborated in 2017 via Skype and wrote scenes back and forth to discuss (through the characters) what it might be like for each of them to live in those times and how some things have not much changed. The play deals with issues of ownership and the economics of being a woman, as well as a freewoman of color, under a system of slavery.

“We are overjoyed to be able to stage a LIVE and LIVESTREAMED performance of SISTERS at our site this August,” said Hildegard Grob, executive director of Keeler Tavern Museum & History Center. “It has been a true honor to work with the outstanding cast and crew as well as the two playwrights under the direction of Kimberly Wilson. Kimberly has brought her talent and wisdom to bear upon this production and the conviction of using art to express challenging aspects of the American experience, including racial inequalities and white privilege. SISTERS brings the connection between the past and the present into razor sharp focus thereby provoking a much-needed discussion about how we can move towards a more just and equal world.”

As director Kimberly Wilson states, "As the energies, voices, and cries are rising up against the systematic racist practices in America and its history, we are now truly at an historical crossroad - a crossroad that also speaks to the history of Anna Marie Resseguie, Phillis Dubois, and Frederick Douglass and the history of slavery and oppression here in Connecticut."

After the performance, there will be a brief intermission, then a talkback moderated by director Kimberly Wilson with the playwrights, choreographer, and cast. Both the LIVE and LIVESTREAMED audience are encouraged to participate in the talkback. Details, including when the doors will open for the LIVE audience, to be announced on the KTM&HC events page HERE. A link to the LIVESTREAM performance will be sent to those registering for the online experience.