Details
Published on Sunday, 09 August 2020 16:06
Written by The Ridgefield Playhouse 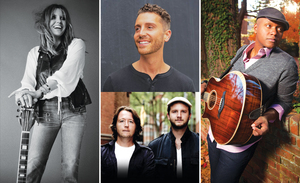 The Ridgefield Playhouse Celebrates Summer with 3 New Outdoor Concerts in August with Grace Potter on August 15, Nick Frandiani & The Alternate Routes on August 28 and Javier Colon and Opening Act Dante Palminteri on August 29

The music continues on August 28 and 29 at the field next to The Playhouse with two stellar nights of music and musicians who also happen to be Connecticut natives!   American Idol winner and Guilford resident Nick Fradiani and Fairfield County’s own The Alternate Routes perform a double bill on Friday, August 28 at 7pm and, on Saturday, August 29 at 7pm,

Season 1 Winner of NBC’s The Voice,  and Stratford native as well as a University of Hartford Hartt School of Music graduate, Javier Colon wraps up the music filled weekend.  Opening for Colon is singer/songwriter Dante Palminteri. All three shows are part of the Pepsi Rock Series, powered by Xfinity as well as the Doyle Coffin Architects Singer/Songwriter series.

All 5 acts performing in August are nationally acclaimed in their own right.  Javier Colon, who refers to his style of music as being "acoustic soul,” was a member of EmcQ and The Derek Trucks Band before taking home Season 1 of The Voice, and is best known for his singles including “As Long As We Got Love,” “Stand Up,” featuring his Voice mentor Adam Levine (Maroon 5) and “Raise Your Hand.”

Dante Palminteri is making his Playhouse debut in support of his 2020 single, “I Don’t Even Know You.”  Talent runs deep in the Palminteri family, as Dante’s father, Chazz Palminteri is an Academy Award-nominated actor who will also be performing at The Playhouse in the near future with his one man show “A Bronx Tale.”  Nick Fradiani recently played Lorenzo in the North American tour of the smash Broadway musical “A Bronx Tale.”  He first gained national recognition in 2014 when his band Beach Avenue competed on the ninth season of the reality talent show America's Got Talent, although they only made it to "Judgment Week.”

But it was in 2015, when Fradiani entered as a solo singer on the fourteenth season of American Idol, that her really got his big break winning the competition.  The Alternate Routes have collaborated with a wide range of artists including singer-songwriter Patti Griffin, director Lisa Cholodenko (The Kids Are All Right), and guitarist Carl Broemel of My Morning Jacket. They have performed on The Late Late Show, Conan O’Brien, have been repeat guests on NPR’s “Mountain Stage and are no strangers to The Playhouse stage, performing here more than 3 times.   Grace Potter has been described as “one of the greatest living voices in rock today.”

Her latest album, Daylight, was released in 2019.  In 2011, Potter founded Grand Point North music festival in Burlington, Vermont, which has attracted national performing artists, including Kenny Chesney, Jackson Browne, The Avett Brothers, Trey Anastasio, Nathaniel Rateliff, The Flaming Lips, Trampled By Turtles, Gov't Mule, and more. She has been featured on many hit songs such as Kenny Chesney’s “Wild Child” and “You and Tequila” and her hit song “Paris (Ooo La La)” was not only a big hit in its own right, but was also featured in the Season 2 promo for the TNT television series Rizzoli & Isles.