Details
Published on Friday, 27 November 2020 10:37
Written by The Ridgefield Playhouse 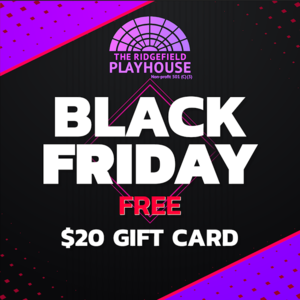 The Ridgefield Playhouse is kicking off Black Friday with a bang!  See all the movies that you want in December!  Purchase a $50 Family 4-pack Movie Pass and you and your family can see an unlimited number of our December 2020 films!  Movies include - Stand!

Give the gift of LIVE entertainment this season - while shopping locally!  Stuff their stockings with gift cards and tickets to shows in 2021!  For every $200 gift card purchased, you will receive an extra $20 gift card on us!  We have something for everyone on your list - including tickets for Raul Malo of The Mavericks on February 20, Linda Eder on March 13, Tower of Power on April 13, Felix Cavaliere's Rascals on April 16, Martin Barre of Jethro Tull on April 21, The Doo Wop Project on April 23, Jay Leno on May 9, Mandy Moore on June 20, Chaka Khan on June 25 and so much more!!

Visit our website at www.ridgefieldplayhouse.org or call the box office at 203.438.5795. Black Friday box office hours are 10am - 4pm