The holidays have not been canceled! Ridgefield Playhouse celebrates the season - Broadway style! 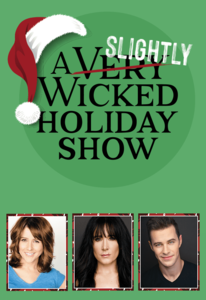 A Slightly Wicked Holiday Show on Saturday, December 19th at 4 and 8pm

Starring Alli Mauzey (Hello, Dolly! Wicked), Dee Roscioli (Wicked, The Cher Show) and Sam Gravitte (Wicked) Ring in the holidays with some of Broadway’s best at The Playhouse in a brand new holiday show that’s perfect for the entire family! Cast members of Wicked, Hello Dolly!, The Cher Show and more, will perform some of your favorite holiday classics – “It’s The Most Wonderful Time Of The Year,” “I Want To Be A Rockette,” “I’ll Be Home For Christmas” and “Santa Claus Is Coming To Town” along with Broadway tunes including “Think Of Me” from Phantom of the Opera and “For Good” and “As Long As You’re Mine” from Wicked The Musical.

Broadway on the Big Screen

Bring the family for socially distanced, limited capacity screenings of some of your favorite musicals - and films based on hit Broadway musicals! It all kicks off tonight with STAND! The Movie Musical!
Cohen and Wolf, P.C. Movie Series

Did you know? The Ridgefield Playhouse is keeping it CONTACTLESS!  Purchase your tickets here and and order lobby concessions and bar items prior to arrival here.