The Heroes of Ned’s Mountain webinar: Sanders to tell hidden stories on Feb. 10 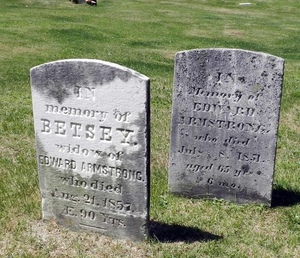 Edward “Ned” Armstrong and his wife, Betsy Armstrong, lived a quiet, hard-working life in Ridgebury in the 19th Century; their tombstones are found among the ancient monuments in Ridgebury Cemetery.

They have been remembered in the name of the area where they lived: Ned’s Mountain, and Ned’s Lane, where it’s believed the family, comprising three generations, had a small compound. But there is much more to the Armstrongs’ story, as well as the story of others who also lived on the mountain, than has been included in published histories of Ridgefield.

On Wednesday, Feb. 10, at 4 p.m., Jack Sanders will share recent research that reveals that the Armstrongs not only operated a Ridgefield station on the Underground Railroad, but that shows that their grandsons were among the many black soldiers who fought and died in the Civil War. He will introduce other black families who lived on Ned’s Mountain and also sent sons to the 29th Regiment (Colored) of Connecticut Volunteers.

Newspaper articles, contemporaneous accounts, old maps, records of the Town of Ridgefield, census records and military records all provided pieces of this story of how Black Ridgefielders were able to assist the formerly enslaved on their journey north to safety and how Black Ridgefielders also fought in the Civil War when the State of Connecticut finally permitted their service.

Mr. Sanders found a number of surprises in his research, which he will discuss in the Feb. 10 webinar. Following the hour-long presentation, there will be an opportunity to ask questions.

The program is presented by the Ridgefield Historical Society, with the RIdgefield Library, and Ridgebury Congregational Church. To register, visit ridgefieldhistoricalsociety.org; a Zoom link will be provided a few days before the program. The webinar is sponsored by CT Humanities and Fairfield County Bank.