Jorma Kaukonen of Hot Tuna Outdoors at The Ridgefield Playhouse

Details
Published on Saturday, 10 April 2021 15:18
Written by The Ridgefield Playhouse 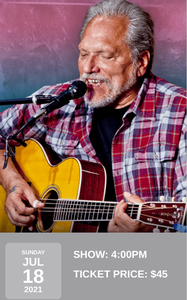 Jorma Kaukonen returns to the Playhouse Tent for TWO shows on Sunday, July 18 at 4:30 and 7:30 pm

Tickets for this outdoor (under a tent) seated show are sold as General Admission, however, seats will be assigned by the venue based on membership levels and date and time of purchase.

As a founding member of both Jefferson Airplane and Hot Tuna, a Grammy Lifetime Achievement Award recipient, and one of Rolling Stones’ 100 Greatest Guitarists, Jorma Kaukonen has remained one the most respected interpreters of American roots, blues and rock for more than 50 years. Kaukonen was at the forefront of popular rock and roll, helping to define the San Francisco sound and a progenitor of Psychedelic Rock. He is a music legend and one of the finest singer-songwriters in his field.

Kaukonen continues to tour the world – both solo and with Hot Tuna – bringing his unique styling to old blues tunes while presenting new songs of weight and dimension. His secret is in playing spontaneous and unfiltered music, with an individual expression of personality. Jorma’s originals from his poignant instrumentals, “Embryonic Journey” (Jefferson Airplane – Surrealistic Pillow) and “The Water Song” (Hot Tuna – Burgers), to his insightful lyrics, “Genesis” (Jorma Kaukonen – Quah), have stood the test of time. Having an undeniable feeling of significance, they have been included in films and covered by many artists who have been inspired by his depth and continuity of spirit.