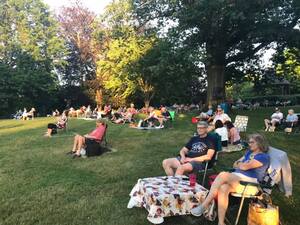 “They perform barefoot, yes, but what you’ll remember is how the music moved you. Lead singer Noah Wall’s voice can blast you backward as well as pull you in, and the rest of the band has the harmonies and instrumental chops to support that ride.” — News & Observe

Tim Grimm is a bit of a Rennaisance man in the performing arts world. He has for the past 20 years, blended his love for songwriting, travel, and the storytelling of acting (theatre, film and television). His most recent recording- GONE, was released in March 2021 and debuted at #1 Folk album for the month. It’s title song was released as a single in October, ’20 and ended up the #1 most played song on Folk radio for the year.. In the Fall of 2016 this same group recorded the single- WOODY’S LANDLORD– which was the #1 song on Folk Radio for the year. Tim’s previous recording, THE TURNING POINT, produced the #1 song on Folk radio in 2014– KING OF THE FOLKSINGERS.

Bring a picnic, lawn chairs or a blanket and enjoy the music!

Thank you to Barbara Manners for all you do for Ridgefield and for being the powerhouse (and founder) of CHIRP! What a community gift!