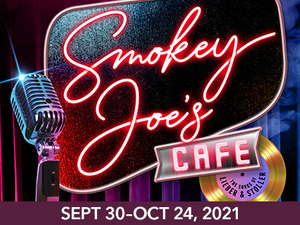 ACT of Connecticut will welcome audiences back for their 2021-2022 Season with the record-breaking Broadway smash-hit musical revue, Smokey Joe’s Cafe - The Songs of Leiber and Stoller.

ACT of CT’s Artistic Director, Daniel C. Levine says, "We are incredibly excited to welcome audiences back to ACT of CT for the start of our fourth season! SMOKEY JOE’S CAFE is the perfect ‘welcome back’ show and this cast is stunning; some of the best vocalists ever to perform at our theater. I guarantee that patrons will be all smiles while watching our dynamic production and will be singing these unforgettable and iconic songs long after exiting the theater!”

One of Broadway’s longest-running hits, Smokey Joe’s Cafe is a celebration of the legendary songwriting team of Jerry Leiber and Mike Stoller, who virtually invented Rock ’n’ Roll. This high-energy and fast-paced show features nearly 40 of the greatest songs ever recorded including “Jailhouse Rock,” “Stand By Me,” “Yakety Yak,” “Hound Dog,” “On Broadway,” “Spanish Harlem,” and many more. Smokey Joe’s Cafe is not only a fun-filled night of 1950’s Rock n’ Roll, it's electrifying musical theatre that will leave you flying high!

Broadway veteran Stephanie Pope Lofgren makes her ACT of CT debut as the production’s director and choreographer. An original cast member of the musical’s West End production, Lofgren has more than ten Broadway credits to her name, including Pippin, Chicago, Fosse, and Kiss of the Spider Woman. She was hand-picked by Bob Fosse and Gwen Verdon to appear in the first revival of Sweet Charity and Fosse’s Big Deal, and has shared the stage with such luminaries as Chita Rivera, Debbie Allen, Ben Vereen, Gregory Hines, and Phyllicia Rashad.

ACT (A Contemporary Theatre) of Connecticut is a nonprofit 501(c)(3) professional Equity theatre located in Ridgefield, CT. Founded in 2018 by Katie Diamond, Daniel C. Levine, and Bryan Perri, ACT of CT presents limited engagement runs of well-known musicals, as well as world-premiere productions by the next generation of writers and composers. In addition to fully produced mainstage productions, ACT of CT’s programming also includes a New Works Series, a Broadway Unplugged Series, and an extensive theater education program. With its 182 seats and turntable stage, the theater offers an intimate, unique, and immersive theatrical experience for its patrons. Given the proximity to New York City, ACT of CT has access to top theatre talent and professionals and, in just three seasons, has become one of the most well-known and highly respected regional theatres in our area. ACT of CT is dedicated to inspiring, creating and nurturing a culturally diverse and equitable environment for its staff, creative teams, cast, musicians, crew members and audiences.

Smokey Joe’s Cafe - The Songs of Leiber and Stoller is presented by arrangement with Concord Theatricals.

ALBERT GUERZON’s Broadway credits include Mamma Mia!, Ghost, Honeymoon In Vegas, and Escape to Margaritaville. National Tours include Mamma Mia! and Margaritaville.  Other favorite credits incllude The Wiz (La Jolla Playhouse), Yoshimi battles… (LJP), the world premiere of Twyla Tharp and Bob Dylan’s The Times They Are A-Changin’ (Old Globe), Miss Saigon, and more recently, On This Side Of The World.

AVIONCE HOYLES is a Rock Hill SC, native and a graduate of The American Musical and Dramatic Academy NY. Previous credits include; (Film/Tv) “FBI:Most Wanted,” “Orange is the New Black,” “60th Annual Grammy Awards,” (Theatre NY/Tour) Bat Out of Hell, Memphis the Musical, Songs for a New World, Rent, Sister Act, Rent, (Recordings) “Imagining Marvin,” “Songs of the Lion King,” and “Where the Sky Ends.”

KEYONNA KNIGHT was recently seen as the lead in the Off-Broadway revival of No Strings as well as performing in the acting company at Oregon Shakespeare Festival.

COURTNEY LONG is making her debut in the ACT of Connecticut’s Production of Smokey Joe’s Cafe. Courtney is a recent graduate of Ithaca College with a B.F.A. in Musical Theatre. Her most recent credits include Gyneciain Head Over Heels, Deloris Van Cartier in Sister Act at Ithaca College, and Ronnette in Little Shop Of Horrors at Bools Flower Shop (Ithaca, NY. The First Site-Specific Production)

KELLY MACMILLAN Is thrilled to be making her ACT of CT debut in Smokey Joe’s Cafe. Kelly recently made her television debut as a principal dancer on Apple TV’s “ROAR” (chor. Marguerite Derricks). Other credits include Footloose (The Muny) and Holland America Line/RWS.

JUSON WILLIAMS a four-time Audelco Award-winner. Owner and operator of JW’s Inspirational Singers of NYC, who was featured in this season’s “America's Got Talent” on NBC. The National Tour of Smokey Joe’s Cafe catapulted his career and starred Gladys Knight. Some New York Credits include, The Color Purple, The Wiz, The Scottsboro Boys, Raisin, and Stormy Weather. Other regional credits include: The Music Man, Ain’t Misbehavin, Memphis, and It Ain’t Nothin But The Blues. Juson has appeared on “Saturday Night Live” and “The John Oliver Show.” In November, he will continue his journey in the Broadway-aimed biopic musical A Wonderful World, starring as the iconic Louis Armstrong.

REGGIE BROMELL attended AMDA where he received his training in musical theater. Past credits include Memphis, Pippin and Dream Girls national / international tours. Notable regional credits include: Sister Act, In The Heights, The Bodyguard, Little Shop of Horrors, and Austen’s Pride.

VAL MORANTO is thrilled to be making her ACT of CT debut with Smokey Joe’s Cafe. Val’s theatrical highlights include the Broadway international tour of The Who’s Tommy, Mary Poppins at the Arts Center of Coastal Carolina, Les Miserables at both the Ogunquit Playhouse & Riverside Theatre in Vero Beach, Fiddler on the Roof at both the Ogunquit Playhouse & Fulton Theatre & Priscilla: Queen of the Desert at the Shubert Theatre in Boston. Look for Val in “Love at the Steeplechase” now playing on the Hallmark Channel, on the upcoming Season 4 of “The Marvelous Mrs. Maisel” and in Steven Spielberg’s Holiday release of West Side Story!