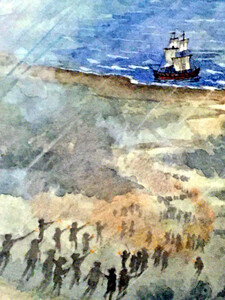 Ridgefielders know that the British troops who marched to Danbury and fought their way out of the area in the Battle of Ridgefield arrived on Connecticut shores from New York, via Long Island Sound in 1777. But it was not just large-scale action involving warships on the Sound during the American Revolution.

Throughout the war, there were raids and counterattacks by Patriots and Loyalists, as well as less ideological incursions by smugglers breaking the economic blockade separating Connecticut from British-held Long Island. Spies also crossed the 10-mile stretch of water, a risky proposition since there were many familial and commercial connections between the two sides that predated the war.

Ed Hynes has researched this tense and exciting period and will present a live webinar about it on Thursday, Oct. 28, from 7 to 8:30 p.m. To register, click here.

This program is part of our series of 20th-anniversary events and is presented by the Ridgefield Historical Society and the Ridgefield Library, with support from Liz and Steven Goldstone and Fairfield County Bank. The raiders’ attack vessel of choice was the whaleboat. These boats were powered by up to 10 men and measured about 25 feet in length. Some had a sail and/or a swivel gun on the bow; they were very maneuverable and could operate quietly, easy to hide in the many inlets and islands of the Sound.

Some raids were led by “individuals” or loosely organized small groups, but sophisticated planning was employed for bigger raids involving hundreds of men, Mr. Hynes says. The lecture will detail some of these raids and discuss the fate of Patriot prisoners held by the British.

Ed Hynes, CFA was born and raised in Wilton.  He attended Wilton High School and graduated from The George Washington University and currently lives in Norwalk. He and his wife are fascinated by history and have visited many important battlefields both here and abroad.