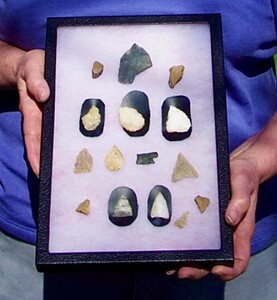 Ridgefield Library will host an in-person event Tuesday, November 30 from 7 to 8pm: 10,000 Years of Suburban Living, with Lynn-Marie Weiland

Once the glaciers had receded from the Ridgefield area, people began to move in. They occupied the land for thousands of years, successfully adapting to the changing weather and environment by developing new technology and social changes. They faced and met every challenge except one: contact. We will learn about the indigenous peoples who lived here before the settlers arrived, and see some of the artifacts they left.

Ms. Weiland obtained her Master’s degree in Anthropology from Hunter College, where she studied Lithic Archaeology: the study of stone tools, how they were made and used.  She began her work at Ward Pound Ridge Reservation and Lake Kitchawan. Her work has been centered on the Native American communities that sold land to the Proprietors of Ridgefield. These people occupied the land between the Norwalk River and the Hudson River, from Poughkeepsie down to the Long Island Sound and New York City.

Register to attend by clicking HERE.