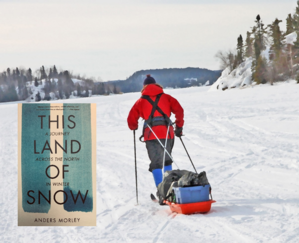 On Tuesday, December 7th at 2:00 p.m. Anders Morley will talk about his new book, “This Land of Snow: A Journey Across the North in Winter,” in person at the Ridgefield Library.

Every journey begins with a single step, or as in Anders Morley’s case, the shush of cross-country skis. In his thirties, happily married and living in a faraway country, Morley was pining for the silent and snowy winters of his New Hampshire home when he decided to explore his long-standing love of winter. He then set off alone to spend the four coldest months of the year traveling on skis across the half-wild country of northwestern Canada.

“This Land of Snow,” tells the story of that journey and of a man who must come to terms with the consequences of living by nostalgia. It is an honest, thoughtful, and sometimes humorous reckoning of an adventure filled with adrenaline and exuberance, as well as mistakes and danger. Both a celebration of a season and a portrait of a place, the book affords readers fascinating and insightful glimpses into life at the edge of the great northern wilderness, the history of cold-weather exploration and Nordic skiing, the right-to-roam movement, winter ecology, and more.

A dual citizen of the U.S. and Canada, Anders Morley grew up in New Hampshire and began skiing at age five. After earning a master's degree from the University of St. Andrews in Scotland, he settled in Italy where he worked as a translator and English teacher and explored the Alps in his free time. He contributes regularly to New Hampshire magazine and his work has appeared in a variety of other publications including The Globe and Mail, Northern Woodlands magazine, Maisonneuve magazine, and The Aurorean.

Books on the Common is co-sponsoring this event and will be providing books for sale and for signing. Please register at ridgefieldlibrary.org or call 203-438-2282.