Details
Published on Monday, 20 December 2021 14:12
Written by The Ridgefield Playhouse 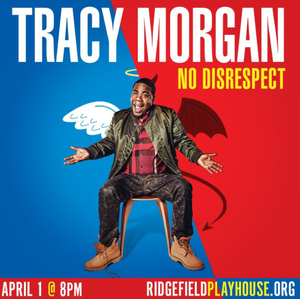 Loved for his uproarious stand-up shows, his 8-year stint on Saturday Night Live and his starring roles on 30 Rock and TBS' The Last O.G., Tracy Morgan returns on April 1st with his new stand-up: No Disrespect Tour!

Public sale begins on Wednesday, December 22 at 10am.

Tracy Morgan is one of the most well-respected comedians in the world, known and loved for his uproarious stand-up shows as well as his eight-year stint on Saturday Night Live and his starring roles on 30 Rock. Most recently, Morgan can be seen in season four of TBS’s The Last O.G., where he stars while also serving as executive producer. Morgan also recently appeared in Amazon’s Coming 2 America alongside Eddie Murphy and Arsenio Hall, while in 2009, he released his first book, I Am The New Black, a compilation of anecdotes and serious moments that shaped him and his career. Expect an evening full of outrageous laughs from the multi-talented multi-hyphenate award-winning certified comedy legend!

Not a Member yet? Get your Membership and instantly access tickets to this performance.