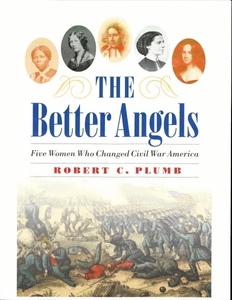 Author Bob Plumb will present a webinar based on his book, The Better Angels: Five Women Who Changed Civil War America, on Thursday, Jan. 27, from 7 to 8:30 p.m. (co-presented by the Ridgefield Historical Society, Ridgefield Library and Books on the Common).

Plumb shows how the five women’s experiences shaped their responses to the challenges, disappointments, and joys they encountered — from Tubman, fearless conductor on the Underground Railroad, to Stowe, the author who awakened the nation to the evils of slavery; Barton, who led an effort to provide medical supplies for field hospitals; and  Howe, whose “Battle Hymn of the Republic” was sung by Union soldiers on the march.  Finally, there’s Hale, who, amid a national catastrophe, launched a campaign to make Thanksgiving a national holiday that helped move North and South toward reconciliation.

Robert C. Plumb was born and raised in upstate New York where he received his education from grade school to graduate school. Between his undergraduate and graduate education, he served as an officer in the Navy, initially stationed on a ship in the Atlantic Fleet and later commanded a patrol boat with a crew of six in Vietnam. Following graduate school, he worked for General Electric in both U.S. and international markets, specializing in marketing programs, and later joined Fannie Mae in Washington, D.C., in senior marketing management positions.

After he retired from the corporate world, Plumb began researching and writing what would become Your Brother in Arms: A Union Soldier’s Odyssey (University of Missouri Press). His second book, The Better Angels: Five Women Who Changed Civil War America, was published in March 2020 by the University of Nebraska Press. He has attended the Yale Writers’ Workshops in residence 2014 through 2019.

To register for the webinar, visit the Ridgefield Historical Society website.

The Better Angels: Five Women Who Changed Civil War America is available at Books on the Common, 404 Main Street, or online.