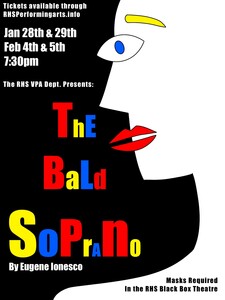 The play is considered a modern classic and a seminal work in the Theatre of the Absurd. Filled with improbable language and scenarios, along with fast-paced, and seemingly extemporaneous dialogue, it was inspired by Ionesco's attempt to learn English by repeating various real-world conversations, thus highlighting society's inability to truly communicate. As a testament to the play's unique appeal, it has the distinction of holding the world record for the longest continually-staged play, running at the Theatre de la Huchette in Paris since 1957.

RHS English and Drama teacher Sherry Cox directs a cast that includes Lloyd Mills as Mr. Smith, an Englishman who enjoys his English pipe and reading his English newspaper in English silence; Audrey Huff as Mrs. Smith; Nate Cohen and Asterix Lombardo as Mr. and Mrs. Martin, who arrive for dinner at the Smiths' only to discover that dinner has been eaten; Martha Huitron as Mary, the maid who believes herself to be Sherlock Holmes; and Matthew Marczak as The Fire Chief, who arrives at the house to put out the fire that has not started yet.

“The Bald Soprano” will have four evening performances, January 28-28 and February 4-5 at 7:30 pm, with snow date of February 6 at 2:00pm. Performances take place in the RHS Black Box Theater, with all audience members required to wear masks. Limited seating available - tickets are $10 and will not be sold at the door, but must be reserved online in advance at www.rhsperformingarts.info/ RHS telephone: 203-894-5750.