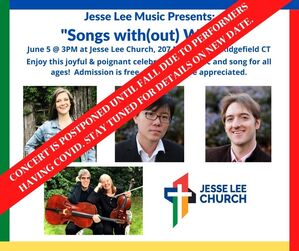 UPDATE: Due to one of the performers having COVID, Jesse Lee Church has announced that tomorrow's performance "Songs with(out) Words" is postponed and will be rescheduled for sometime in the fall.

Jesse Lee Church Music Director, Sarah Fox, and pianist and composer, Marc Chan, have pulled together a team of talented musicians and composers to create a joyful and poignant celebration of life through music in this upcoming performance called “Songs with(out) Words.” This concert has something for music lovers aged 2-102 and it will be performed at Jesse Lee Church on June 5 at 3PM.

Performed by Marc Chan and Benjamin Steinhardt on piano, Gunnar Sahlin on cello and Suzanne Corey-Sahlin on viola, the first half of this 70-minute show are songs without words, and features instrumental pieces that are inspired by hymns and other tunes. The opening work, “Moments of Music,” was composed by Gwyneth Walker specifically for Gunnar and Suzanne. This piece made its debut performance at Jesse Lee Church in the Fall of 2021 and it is back by popular demand as the show opener this June.

The second half of the show features songs with words. Jesse Lee’s Music Director, Sarah Fox, joins the musicians to perform vocals on a variety of songs. The first two songs are two brand new pieces that Marc Chan composed the lyrics and music to as part of a full-length Broadway show he is creating about the poet Emily Dickinson. The first song is about the young Emily and is told through a letter she wrote to her brother, Austin. The second song features Emily in her later years and it recounts both the joys and sorrows of a life well-lived.

The concert closes with a new arrangement of Joni Mitchell’s hit, “Both Sides Now.”

“There is truly something for everyone in this concert,” according to Sarah Fox. Marc Chan adds, “We hope the music pulls people across generations together in this beautiful celebration of songs with and without words.”

There is no charge for the show; donations are appreciated.