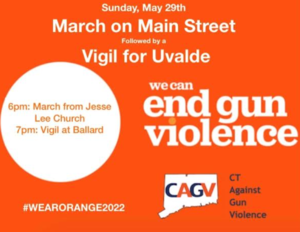 We Can End Gun Violence March and Vigil

Jesse Lee is the starting point for a March on Main Street followed by a Vigil in Ballard Park for Uvalde on Sunday, May 29. This event is sponsored by CT Against Gun Violence (CAGV).

All who support this effort are welcome to participate.

Wear orange if you can!

This is in memory of Hadiya Pendleton who marched in President Obama's second inaugural parade on January 21, 2013. One week later, Hadiya was shot and killed on a playground in Chicago. Soon after this tragedy, Hadiya's childhood friends decided to commemorate her life by wearing orange, the color hunters wear in the woods to protect themselves and others. Wear Orange Day began on June 2, 2015 -- what would have been Hadiya's 18th birthday.