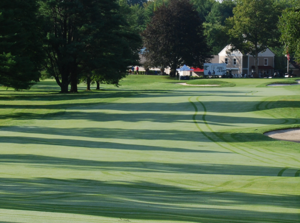 The 120th Connecticut Amateur will be contested at Ridgewood Country Club from June 20-24. This year will mark the fourth time that Ridgewood CC has hosted Connecticut’s premier amateur event.

“We hosted the Connecticut Open in 2020 when Ridgewood CC celebrated its 100th birthday so there are a lot of traditions and history tied to hosting marquee events at Ridgewood CC,” said head professional Justin Foster.

Designed by Deveraux Emmett, Ridgewood CC was established in 1920 and has welcomed some of golf’s greats to the tee including Walter Hagen, Tommy Armour, Ken Green, Mark Calcaveccia, and Gene Sarazen who owned a house nearby and would often prepare for tournaments at the club.

The par-71 layout, which last hosted the Connecticut Amateur in 2000, will play at approximately 6,750 yards and it will provide a stiff challenge throughout the week to the field.

“I definitely have a lot of respect for the subtle difficulties the course will present,” two-time Connecticut Amateur winner Rick Dowling said. “Ridgewood CC will pose a great test for all competitors. Par will be good a good score all week long.”

Although not a demanding course length wise, Ridgewood CC will require players to find the right spots on the putting green. If they can execute approach shots then there is an ability to find birdies.

“The greens are tiny and surrounded by trouble so managing your shots into the green and of course putting well will be the keys to successfully getting around Ridgewood CC,” Foster said. “Depending on the hole locations you can have such a small quadrant of the green that you have to hit it into. I am talking smaller than the size of a parking space to really have a good chance at not only a birdie but a comfortable two-putt.”

The closing stretch at Ridgewood CC will be anything but comfortable and should provide plenty of match play fireworks. Beginning with the par-5 15th the closing four holes include two of the course’s three par-5s. The stretch begins with a fairly straight away 533-yard par-5 that will offer a birdie opportunity. Following a chance to score players will play for par on the difficult 461-yard par-4 16th and on the 225-yard par-3 17th before ending with a scoring opportunity on the 555-yard par-5 18th.

“Match play is such an exciting format and I’m looking forward to making another deep run,” said Drew Brennan who made a surprise run to the semifinals in 2021. “I will lean on my experiences from last year. I’ve heard great things about Ridgewood CC and I know they will be a great host for this championship.”

The 120th Connecticut Amateur will begin on Monday, June 20 at 7:30 a.m. with the first of two days of stroke play qualifying. Following the completion of play on Tuesday the field will be cut to 32 for the start of match play. Wednesday will include the Rounds of 32 and 16 with the quarterfinals and semifinals to be played on Thursday. Friday will feature the 36-hole championship match.

Chris Ayers (Goodwin Park GC): Ayers has had success in the Connecticut Amateur in recent years. In 2020 and 2021 he advanced to the Round of 16 while in 2019 he was the R.M. Grant Medalist before falling in the Round of 32.

Ben Carpenter (CC of Darien): Last year Carpenter, a member of the Yale golf team, had a strong summer in CSGA events. First he reached the Round of 16 at the Connecticut Amateur then at the Connecticut Open played on his home course Carpenter held the 36-hole lead before settling for a third place finish.

Patrick Casey (Torrington CC): In 2020 Casey shared third place at the Palmer Cup, and by way of his T8 finish at the Connecticut Open he tied for low amateur honors. Last year he reached the Round of 16 at the Connecticut Amateur.

Ben Conroy (New Haven CC): Conroy won the 2018 Connecticut Amateur at the CC of Waterbury and added to his trophy case in 2020 with a win at the Connecticut Mid-Amateur.

Rick Dowling (Golf Performance Center): Dowling is a two-time Connecticut Amateur champion winning in 2017 and 2019. In 2020 he won the Palmer Cup and last year he won the Connecticut Mid-Amateur.

Adam Friedman (Great River GC): Friedman has been a major threat in each of the last two Connecticut Amateur’s. In 2020 he made a run to the quarterfinals and last year he made it to the semifinals. In 2020 at the Connecticut Open hosted by Ridgewood CC Friedman was in the mix for much of the week before eventually finishing T12.

Mike Kennedy (Great River GC): The 2017 Connecticut Mid-Amateur winner reached the Round of 16 in each of the last two Connecticut Amateur’s.

Walker Lohrey (Tumble Brook CC): In 2021 Lohrey earned the three-seed at the Connecticut Amateur and made a run to the quarterfinals. This year he finished T7 at the Palmer Cup and competed in U.S. Open Final Qualifying.

Tim Murphy (The Stanwich Club): In 2021 Murphy reached the Round of 16 at the Connecticut Amateur and last month he played in the U.S. Amateur Four-Ball with brother Dan.

Jackson Roman (Shuttle Meadow CC): Last year Roman, who just completed his freshman season at Loyola University Maryland, had a strong season reaching match play at the U.S. Junior Amateur and played well at the Connecticut Open including a 5-under 66 in the first round that left him one shot off the lead.

Jamie Sheltman (Wallingford CC): The winner of this year’s Two Man Championship, Sheltman has made it to the Round of 32 in each of the last four years at the Connecticut Amateur. This year he will be looking to make a deeper run.