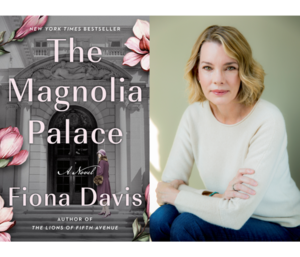 Fiona Davis is the New York Times bestselling author of six historical fiction novels set in iconic New York City buildings, including The Magnolia Palace, The Dollhouse, The Address, and The Lions of Fifth Avenue, which was a Good Morning America book club pick. Her novels have been chosen as “One Book, One Community” reads, and her articles have appeared in publications like The Wall Street Journal and O the Oprah magazine.  This evening, Davis will be discussing her most recent title, The Magnolia Palace.

Davis first came to New York as an actress but fell in love with writing after getting a master's degree at Columbia Journalism School. Her books have been translated into over a dozen languages and she's based in NYC.

Our co-sponsor, Books on the Common, will have The Magnolia Palace for purchase and signing as well as some copies of Davis's other books.