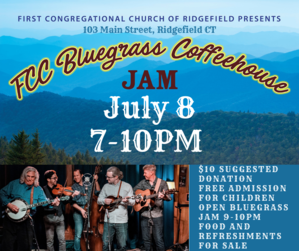 Bluegrass Coffeehouse presents Bale Kickers and Friends on Friday, July 8th for an evening of outstanding live music, great for the whole family!

Refreshments, baked goods, and pizza will be for sale. The suggested donation is $10 per person. Free admission for children.

The Bale Kickers, comprised of Jay Maloney and Jeff Wasbes, are sure to get your toes tapping and hands clapping as they jam the night away! They will be joined by Bruno Bruzzese (banjo), Austin Scelzo (fiddle) and David Gandin (bass) at the First Congregational Church of Ridgefield at 103 Main Street outside on the terrace.

The Bale Kickers have a long list of accomplishments and talents. Jay Maloney is a uniquely talented multi-instrumentalist with expertise and experience across several genres of music. Jay brings a creative and positive energy to any musical situation that is impossible to ignore. A gifted drummer from a young age, Jay has taken that strong sense of rhythm and groove to his songwriting and arrangement. He combines this with a deep connection to bluegrass and other American roots music. Jay released his first self-produced full-length record, Signals & Strengths, in 2018. The record has received extensive critical acclaim. Jay finished his sophomore opus, Humans & Mountains, in 2019. Jay regularly performs across the region solo and with several ensembles. His unique blend of talents and influences makes him a highly sought-after musician.

Jeff Wasbes is a musician and educator. As the founding guitar player for several groups throughout the Capital District, Jeff’s technical ability and creativity are notable for band and audience members. As the founding guitarist in Blind Crow, a progressive bluegrass quartet, Jeff has performed throughout the region and beyond, including at Saratoga’s Caffe Lena and Darryl’s House in Pawling, New York. They also shared the stage with Yonder Mountain String Band at Albany’s concert series, Alive At Five. You can hear Jeff’s performance and compositions on Blind Crow’s “Forgo The Balance”, the band’s 10 track self-produced EP. Jeff continues work in his home studio on his first solo record, due out in 2022.